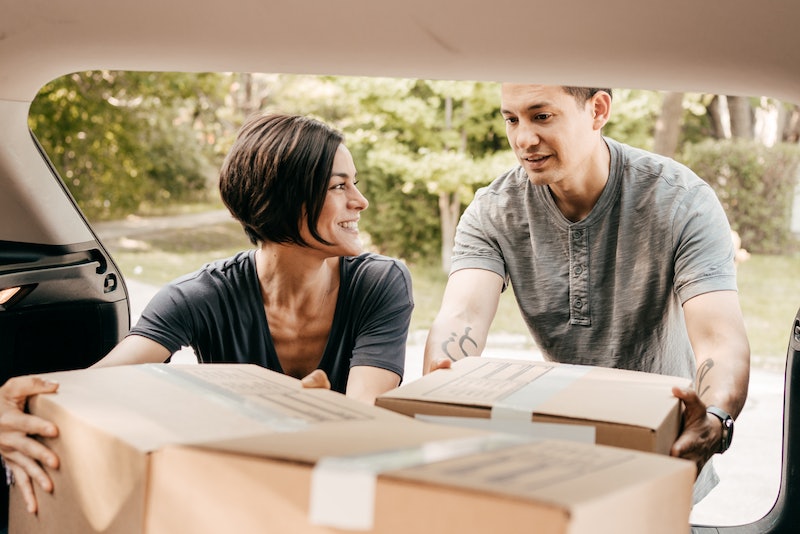 If you've moved house before, you know that some funky things can happen to your mental health when you move. At first, it may feel like you have a handle on things — after all, surely the hard part was finding an affordable place to live that isn't infested with cockroaches or surrounded by neighbors of the Rosemary's Baby variety. However, anyone who's moved quickly discovers that Rosemary's Baby might actually be preferable to the logistical nightmare of moving. If you don't believe me now, you will when you're collapsed in a sweaty heap on the carpet of your old apartment, quietly singing to yourself in the hopes that a team of animal helpers will come clean your place before your move-out inspection in the morning.

Unfortunately, though, those animal helpers are unlikely to appear — and as the New York Times put it in 2010, moving is an "intensely emotional experience." In other words, it's terrible in every way, shape, and form. In fact, moving house is so stressful that numerous research studies have focused on the psychology of relocation. Some people are more likely to move than others — as the Times points out, frequent moves may be a sign that someone is outrunning their problems — but whether you move once a year or once in a lifetime, it's safe to say that relocation is tough on everyone.

Fortunately, it's not all bad: New experiences have been tied to happiness, and as you'll see below, moving can actually have some pretty cool effects on your memory. Let's look at four things that happen to your mind when you move, according to research.

1. You're Super Stressed Out

It's widely acknowledged, but it's worth acknowledging: Research has shown that moving is incredibly stressful. In 2012, a study in the Journal of Epidemiology found a link between frequent moves in adolescence and psychosocial stress as an adult, and research in 2014 suggested that it's as stressful as other major life events, like divorce.

2. You're Unhappier As An Adult (Sometimes)

Moving appears to be particularly hard on adolescents. A Danish study once indicated a connection between frequent moves as a teenager and mental illness as an adult, and in 2010, a study in the Journal of Personality and Social Psychology found that kids who move often are more likely to report poorer quality of life as adults. But there's a catch — introverts were more likely than extraverts to be unhappy, probably because they have a hard time making new friends.

3. You Learn To Discard Relationships

Admittedly, it's hard to tell whether frequent movers are more likely to discard relationships in the first place, or whether the moving forces them to have a more transient lifestyle with regards to their relationships. Either way, however, a study published earlier this year suggested a link between relocating and fewer attachments to possessions and people.

4. Your Memory Improves (Kind Of)

According to research recently published in the Journal of Experimental Psychology: General, people are more likely to remember events that occur around a relocation. In the study, researchers asked participants to recount their most memorable experiences, and they found that a little over a quarter of the memories occurred before or after moving house. (If left up to chance, it would have been around 13 percent.) According to the Science of Us, the authors of the study attributed this to a "relocation bump" — we remember things more clearly when there are easy points of reference, like moving across the country.

Of course, depending on how disastrous your moving experience was, this could be a good or a bad thing: I'd rather not remember the time I fell asleep curled around a vacuum cleaner because I was too tired to move after deep cleaning an old apartment.