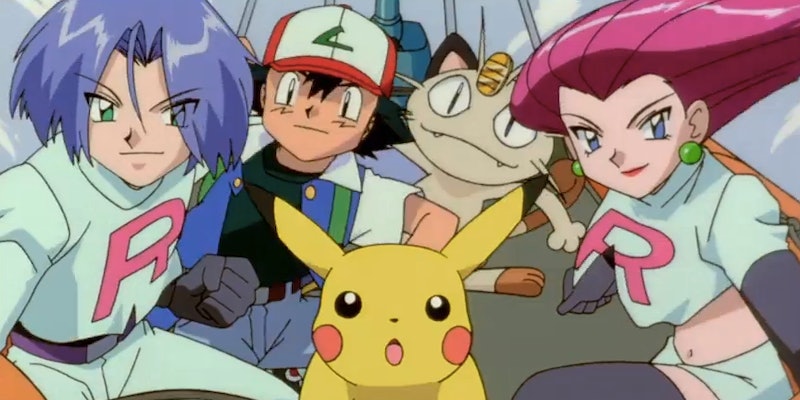 With all of us signing up to be Team Mystic, Valor, or Instinct, I can’t help but be reminded of the clash of the legendary birds in Pokémon 2000. Yes, I forced my parents to take me to Pokémon: The Movie 2000: The Power of One. It wasn’t technically released at the height of Pokémon’s power; sure, the line was outside of Hazlet Multiplex, but to be honest the franchise was already starting to ever-so-slightly wane into the silver era of, well, Gold and Silver. Still, Pokémon 2000 is a ridiculous movie, nostalgia be damned, and now seems like a fitting time to revisit that.

The basic premise is that Ash, Misty, and some other guy get sidetracked on their Orange Island journey and wrapped up in a Shamouti Island festival, one that pits Ash as “The Chosen One” meant to save the world from the forces of fire, ice, and thunder. Plot Twist: this becomes a literal Thing when some rando baddie named Lawrence III captures Articuno, Zapdos, and Moltres, and it starts messing with the fabric of the universe. Lugia is there, trying to keep the peace, but it’s really up to this small child to collect three stones and, IDK, make the birds stop freaking out at each other. Honestly, this made a lot more sense when I was nine.

With all apologies to Mama and Papa Grace, these are all the side-eye worthy things I caught watching Pokémon 2000 as an adult.

1. The Talking Computer That For Some Reason Explains The Background Of All The Legendary Birds

I mean, back then we all either had Windows '98 or Apple Exposition. Clearly this guy invested in the latter.

2. Also He's Going To Take Over The World With A Rousing Game Of Chess

That should be riveting for all the 9-year-olds in the audience.

3. This Rando With The Stupid Bangs

I'm trying to remember if she was in the series but I think, nah, they just unnecessarily added her into the movie instead of having Ash just traveling with the fam on his Lapras.

Ugh, Tracey was no Brock (that is, a hunky, domestically-blessed, romantic Gym Leader) to say the least.

5. The Fact That I Was So Emotionally Un-Invested In The Orange Islands Saga That I Just Thought That Was A Giant Mama Magikarp Swimming With A Bunch Of Baby Magikarp

But um, no, Team Rocket is traveling in that thing.

6. Lugia, A Legendary Bird That Can Swim

7. The Fact That This Group Photo Is A Thing

My mom definitely has a framed picture of me, three friends, and our local doctor hanging up in our living room.

8. "Well, This Is The Time Of Year Where The Sun Shines Every Day!"

Professor Oak: a Pokémon expert, yes, a meteorologist, hard no.

9. Then A Bunch Of Digletts Steal His Bike For No Reason

And now he knows how Misty feels.

10. "I'm Right Here! The Only One Not Wearing Some Stupid Costume!"

Yeah, Lord knows one of those traditional island garbs would totes clash with those super normal-looking pigtails.

11. Misty Being So Jealous Of Melody Kissing Ash That Her Hair Twitches With Rage

Togepi ships it, though.

12. Anyway, Here Is A Chicken Leg With A Bow On It

Misty is eating it angrily, because this is happening:

I feel like there is... little explanation for any of this. I just suspect something mystical is afoot.

Um, Misty is someone who's known Ash for more than 24 hours, so, you know, she has sort of an attachment to this whole Ash-is-in-trouble scenario.

No, Tracey, nobody is ever talking about you.

No wait, sorry, I just had a '90s nostalgia short circuit.

17. "Prepare For More Trouble Than You've Ever Seen!" "And Make It Double, We're On The Big Screen!"

If you don't retroactively realize that Team Rocket is the best part of this franchise, you're wrong.

18. "Pikachu's Pretty Tough, But Zapdos Isn't Even Feeling It's Attack" "Those Aren't Attacks, Jesse, Pikachu's Trying To Talk To Zapdos"

I just feel like a text message would've been simpler.

19. "Once I've Captured Articuno, The Real Prize Will Appear"

Who... who are you talking to?

20. Michelangelo Apparently Was Commissioned To Paint This Guy's Evil Lair

I think it's a bit garish, but to each their own.

21. "That's Disgusting! The Way You Talk It's Like Pokémon Are Things To Collect Like Dolls Or Stamps!"

Yeah, not for anything, Misty, but 20 years later the entire premise of the franchise is literally to collect Pokémon like they're dolls or stamps or trading cards or Burger King toys or a series of color-themed video games.

22. "Well, Imagine If Of An Imbalance Of Power Occurred Between Lightening, Ice, And Fire. Here's Potentially How The Underwater Current Has Formed."

Professor Oak: Not a meteorologist, also not teaching courses at RISD anytime soon.

23. Meanwhile, Ash's Earth-Saving Solution In These Movies Continues To Be "Running Into Danger And Getting His Ass Handed To Him"

This would never happen to Gary Oak, I'm just throwing it out there.

24. Lugia, Again, Who Seriously Looks So Doofy Next To All The Other Bird Pokémon

You know, the ones that are actually birds.

We're not happy about it either.

26. Then Ash Starts Sobbing About What If He Can't Do It And Yeah, That's Actually A Totally Sane Reaction Because He's A Literal Fourth Grader

How can this possibly go wrong?

27. "That Just One Pokémon Could Help The World Would Be Worth The Journey For Thousands Of Them Any Day. But This Day, The One That Can Make All The Difference Is You"

"And the Non-Brock with the headband over there, I guess."

29. And Then Lawrence Finds An Ancient Mew Card, Just Like The Ones Children Collected By Going To The Original Pokémon Movies

But that's none of my business.

See? This movie is a childhood classic, and may the love for Pokémon never die, but... seriously, guys, what did we just watch?

More like this
Joseph Gordon-Levitt Called Out This “Unrealistic” Scene From '10 Things I Hate About You'
By El Hunt
10 Eurovision Moments That Celebrate The Weird & Wonderful Camp Extravaganza
By Sam Ramsden
Elizabeth Olsen's Chris Evans Friendship Update Was Accidentally Hilarious
By Grace Wehniainen
Wait, Did Wanda Die In 'Doctor Strange And The Multiverse Of Madness'?
By Arya Roshanian
Get Even More From Bustle — Sign Up For The Newsletter