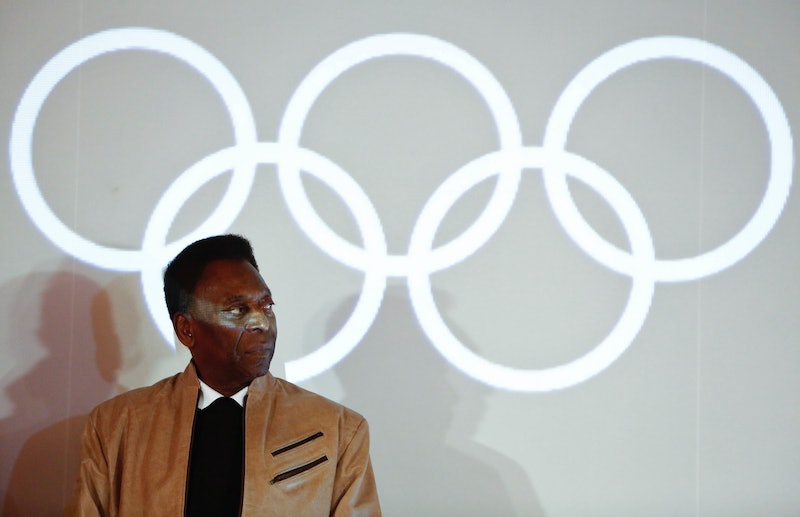 The Olympic opening ceremony is this Friday and the final preparations are just coming together for the world's biggest sporting event. One of the time honored Olympic traditions is the running of the Olympic flame, which culminates in the lighting of the cauldron at the top of the stadium where the opening ceremony is held. Rumors are swirling that soccer legend Pelé will light the Olympic cauldron, and although it's unconfirmed thus far, it looks like there's a good chance it's going to happen.

According to recent reports, Pelé has been asked to light the cauldron by International Olympic Committee president Thomas Bach, but he isn't sure that he can quite yet and is waiting to receive word from his sponsors. Sport 10, the company that owns his brand name, would have to cancel a planned trip for the soccer star for him to participate in the Olympics.

It just makes sense to have Pelé light the cauldron for the Olympics in his homeland. As a native Brazilian and one of the country's national heroes, he would be a representative for the Brazilian people and a symbol that Brazilian athletes are going to be strong contenders in the games. Plus, Pelé never got to compete in the Olympics because professional athletes were not allowed to compete in the games when he was playing. He definitely wants to participate, since he joked about coming out of retirement to play for Brazil in the Olympic tournament this year, so having him light the cauldron would be an awesome way to include him.

There are a few other Brazilian athletes who could be contenders for the torch lighting duty if Pelé can't make it. Jackie Cruz Silva and Sandra Pires were the first gold medalists in beach volleyball at the Atlanta Olympics in 1996, and Giba, a three-time medalist, is one of the most famous volleyball players in Brazil, one of the country's most popular sports. Former #1 ranked tennis player Gustavo Kuerten could also fill the position — like Pelé, he never medaled in the Olympics, but he's still a popular figure in Brazilian sports. Although no other Brazilian athlete has Pelé's name recognition or sports legacy, Brazil has produced a ton of Olympic athletes who would do a fantastic job opening the games.

Official confirmation of the cauldron lighter could come in the next two days, but it could also stay a surprise until the opening ceremony begins. Whoever is ultimately chosen to fill the role will have an incredible opportunity to officially begin the much anticipated Rio Olympics and represent the host country in the ancient tradition.

More like this
9 Films About Mental Health To Watch On Netflix UK
By L'Oréal Blackett and Sophie McEvoy
Jake Daniels Just Became The UK’s First Active Football Player To Come Out As Gay Since 1990
By Sam Ramsden
Chelsea Woody On Shattering Stereotypes In Surfing
By Leah Groth
What Is Jeanie Buss' Net Worth? The Lakers President Is Uber Rich
By Hugh McIntyre
Get Even More From Bustle — Sign Up For The Newsletter