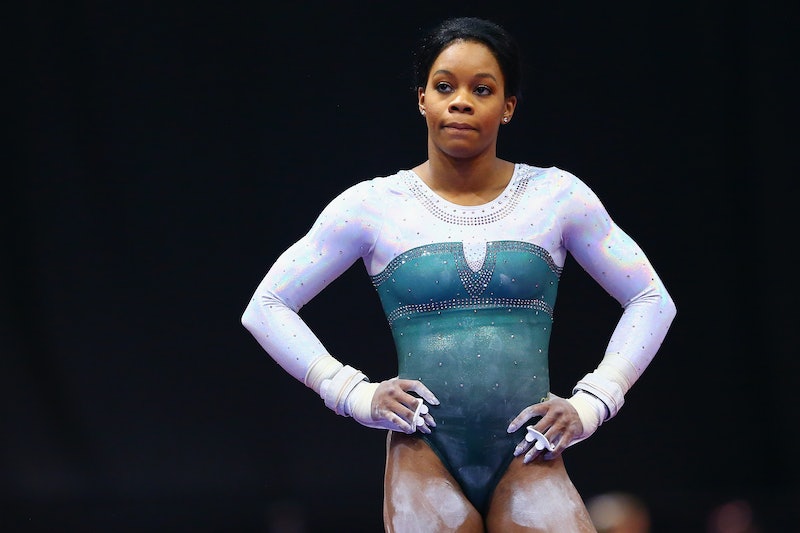 Over the past eight years, the growing popularity of social media has changed the landscape of the Olympics for the audience, offering those at home a glimpse into the personal experiences and emotional highs and lows of those competing via their smart phone. But how has social media changed the Olympics for athletes today? Olympic legends Jackie Joyner-Kersee and Shannon Miller know just how important a tweet can be.

The two women, who each have multiple gold medals to their names, see social media as a powerful tool that can greatly help the current crop of talented athletes succeed inside as well as out of the stadium. "Kids can't believe that we didn't have social media (or cell phone and internet for the most part) during the 1996 Olympics. And I almost can't either," Miller tells Bustle in an e-mail. "Social media has changed the way we are able to interact with fans, friends and family. It's a way that we can have a conversation directly with them and talk about so much more than the competition." Looking back 20 years, athletes were at the mercy of TV and newspaper coverage for the most part, with little to no control. Now, they can easily tell their own story through candid snapshots or 140 character posts.

It is the immediacy of these interactions that makes them so successful, points out Joyner-Kersee. "If you look at these Olympic games versus my Olympic games, there is such a big difference, because now you can post on social media, and you have things happening in real-time," Joyner-Kersee tells Bustle. "The athletes have the ability to really self-market in a way that I couldn’t when I was competing. To use social media and the new platforms — it’s really great." AdWeek predicts that social media will play its biggest role yet in this much-anticipated worldwide event, "given the ascendance of Twitter, Snapchat, Facebook Live and Periscope since the last Summer Games were held."

In an article titled "5 U.S. Olympians You Should be Follow On Social Media During the Summer Games," AdWeek states that "it will be critical for athletes to spend time on these platforms to both connect with their fans and also to pitch the brands sponsoring them." A few athletes already have a social media game that's on fleek. Star gymnast Gabby Douglas, who won gold in 2012 for all-around and team, now has over 800,000 Twitter followers and nearly a million followers on Instagram. Numbers that are sure to surge once she enters the Olympic spotlight once more on August 7. Many other popular athletes such as have followers hovering in the low to mid 100,000 range — which is still pretty darn good.

Taking advantage of social media can certainly help athletes become more attractive to companies in terms of gaining sponsorships and endorsements. However, Miller warns that athletes should be careful not to let these platforms become an added pressure or distraction. "I think to some degree the pressures have intensified. Certainly the use of social media and the incredible ability for fans and media to cover sports has had an effect," Miller says. "During my time we had television of course (I’m not that old), but it was fairly easy to block out the cameras and pretend they weren’t there. Now athletes are reached directly through their phones." Phones give fans access, but they also can give the athlete easy access to everything that is said about them online. Miller reminds us that smart phones and social platforms "can be great as a way to connect, but can also backfire if you start to 'read your own press' as my parents always said."

One of the most evident signs that our Olympics are changing thanks to social media is perhaps the nickname given to the young Rio-bound gymnast Laurie Hernandez. International Gymnast Magazine dubbed her the "Human emoji" for her effusive personality and expressiveness. Never before has a powerful Olympic athlete been compared to something used in texting, and the nickname went viral.

Best of luck to the athletes, and no matter what their standing is on social media, may they remember to properly stretch out their thumbs before engaging in any significant tweeting.