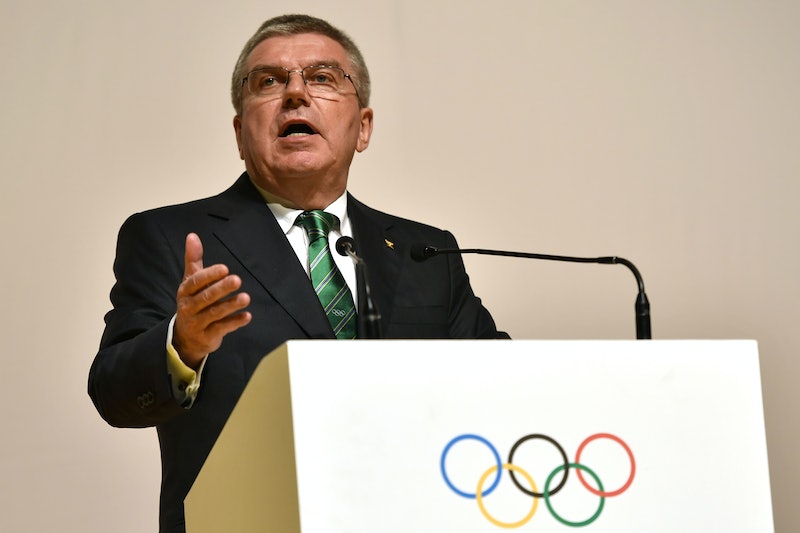 Even though the Olympic Games are fundamentally a forum for friendly international competition, not all of the major players landing in Rio are athletes — it takes a whole lot of behind-the-scenes logistical work to pull off the biennial games. Just who is Thomas Bach? He's the ninth president of the International Olympic Commission, and a former Olympian himself.

Bach was elected to serve as president of the IOC in 2013, but has been with the organization for a quite some time. Joining in 1991, he was elected vice president twice, and has been on several subcommittees as well.

A former Olympic fencer, Bach has a distinct vision for how the IOC should function, and the role that he plays as president of said group. In his manifesto, released by the IOC upon announcement of his electoral victory, Bach uses a musical analogy, stating: "We members are like a universal orchestra. We can produce a perfect sound only if all can contribute with their individual instruments." Identifying as the conductor of the metaphorical orchestra, he continues on to say:

The President motivates the Members to participate in the performance and ensures that each Member can contribute with his or her individual strengths. The President is responsible for balancing the potentially different sounds from different parts of the orchestra – leading to a harmonious tune produced by different instruments playing together.

To be sure, the past few years have been a test of Bach's harmonious-sounding philosophy. From the allegations of corruption in Rio — and photos of some sketchy-looking water — to overseeing a delicate negotiation process with the Russian contingent of athletes accused of violating anti-doping regulations, the IOC and Bach himself have definitely been in the news over the past few weeks. Bach and the Olympics said that they have been proactive in handling corruption allegations and that they would "never, ever risk the health or the condition of any athlete for a competition."

It looks like Bach has been able to handle it all with aplomb, perhaps owing in no small part to his past successes in fencing and as a lawyer with a degree from Germany's University of Würtzburg. “The Olympic movement must stand side by side with our Brazilian partners and friends to address this exceptional situation in an exceptional way," he told reporters in March.

While it remains to be seen whether or not the 2016 Olympics will be able to go off without a hitch, at the end of the day, Bach's overseeing of the Rio games will surely be an influential point in his IOC presidency.

More like this
President Zelensky Spoke Out On Ukraine's Chances Of Hosting Eurovision Next Year
By Sam Ramsden
Jake Daniels Just Became The UK’s First Active Football Player To Come Out As Gay Since 1990
By Sam Ramsden
What Is Jeanie Buss' Net Worth? The Lakers President Is Uber Rich
By Hugh McIntyre
Rebekah Vardy & Coleen Rooney’s Trial Has Officially Begun
By Bustle UK
Get Even More From Bustle — Sign Up For The Newsletter