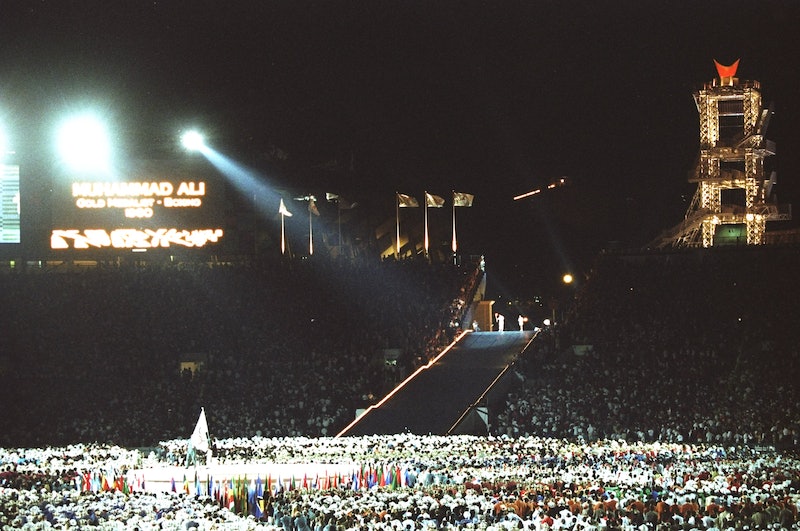 The 2016 Summer Olympics will formally kick off on Friday evening in Rio de Janeiro, and everyone wants to know: Who's going to light the Olympic Cauldron this year? More than 12,000 people helped transport the Olympic flame to its final destination, but the identity of the final torchbearer — the one who will actually light the Cauldron — will remain a secret until the very last moment. While we wait to find out who that might be, let's look back at an amazing moment in Olympics history: 20 years ago, when Muhammad Ali lit the Olympic Cauldron in Atlanta.

In July 1996, 36 years after Ali had won his own Olympic gold medal, he became the final torch bearer at that year's Summer Olympics. After his death earlier this year at the age of 74, the image of Ali lighting the cauldron, his hand shaking slightly as he did so, was a powerful one that reminded us of his legacy. When Ali received the Olympic flame, a giant screen lit up with his accomplishments as an athlete and humanitarian. He inspired many people throughout his life, as well as on that night during the Opening Ceremonies, and his fellow torchbearers were no exception.

It was swimmer Janet Evans who passed the torch to Ali all those years ago. Evans said last year that in that "defining moment," seeing Ali waiting to light the cauldron reminded her of her responsibility as an Olympic champion to "inspire and motivate others," according to NBC Sports:

And I ran up that track, and I ran up those three big, long stairways. And I got to the top, and there stood Muhammad Ali. And I never cried after any of my Olympic medals, but I wanted to cry. And my moment with him was brief; you saw how quickly he lit that flame. But that moment for me, standing there, watching this man, with his courage and his determination, and being brought into the Olympic fold once again, 36 years after his gold medal in 1960. And to stand there in front of the world and inspire even more young people like myself, to be and do and accomplish anything we want to do, it was an epiphany for me. It was a defining moment in my Olympic career.

As the opening ceremony rapidly approaches on Aug. 5, it's worth looking back throughout Olympic history and celebrating the impact that champions and activists like Ali had on the world.