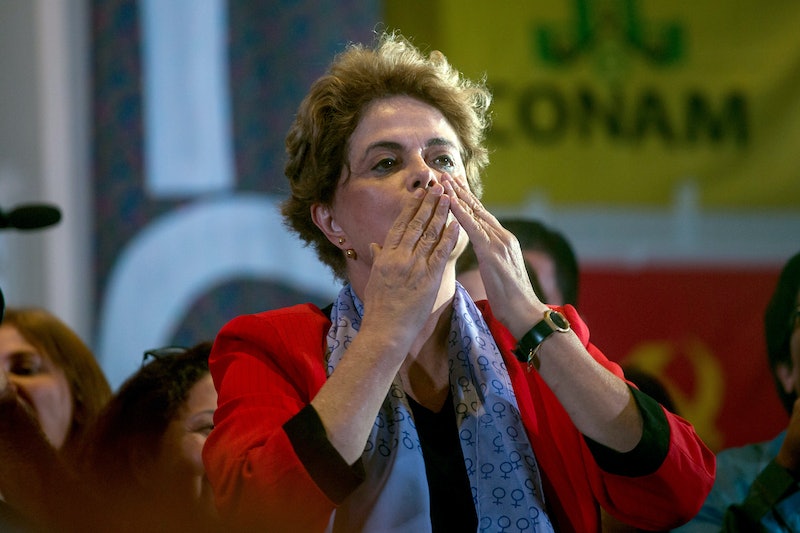 Eyes around the world will be on Brazil on Friday, as the Rio Olympics kick off with the long-awaited Opening Ceremony, but there's at least one Brazilian figure who will be missing from the momentous event. President Dilma Rousseff will not attend the Opening Ceremony, as she draws closer to finding out her fate in ongoing impeachment proceedings. The Brazilian president's presence could have caused quite a stir at the Games, which are expected to be otherwise celebratory.

Rousseff's spokesperson confirmed last week that the suspended president won't attend Friday's opening ceremony. According to Time, Rousseff's predecessor, the also-controversial Lula da Silva, won't attend either. Although neither officially revealed why they wouldn't attend, the move comes with a whole lot of symbolism.

For one thing, Lula helped Rio earn the Olympic opportunity. It was during his term that Rio was awarded the Games in 2009. At the time, Lula called it "the greatest gift that a president could have," to host the Games. For her part, Rousseff was meant to get Rio ready for the big event — that is, until she was suspended from office in May pending an impeachment trial. The impeachment proceedings are ongoing, but a verdict isn't expected until after the Games have come and gone.

The verdict will rule on whether or not Rousseff acted corruptly as president, an office she held for more than five years before being suspended. She's accused of covering up Brazil's growing financial crisis — a crisis that has now become the responsibility of Vice President Michel Temer — but she denies any allegations that she knew of any wrongdoing. Temer has assumed the responsibilities of the presidency during Rousseff's suspension, and, as such, he'll preside over Friday's Opening Ceremony.

Both Temer and Rousseff were officially invited by the Olympics' organizing committee, but Temer noted in June that it would be wholly "awkward" to have two presidents at the Games.

There won't be two presidents at the Opening Ceremony — and there won't be two presidents in all of Brazil for much longer either. As the Opening Ceremony takes place on Friday evening, the Brazilian senate is expected to take a step forward in Rousseff's impeachment proceedings earlier in the day. According to Reuters, the impeachment committee is expected to approve a report from the senate on Friday — a report that points a finger at her for misusing state funds. Talk about awkward.

Whether Rousseff is impeached or not, an answer to Brazil's presidential drama will likely come soon. For now, it's probably for the best that Rousseff will stay away from the Opening Ceremony, as the controversy surrounding her scandal — no matter the truth — could cast a shadow over the celebratory Games. Plus, you wouldn't want the acting president to feel awkward, right?