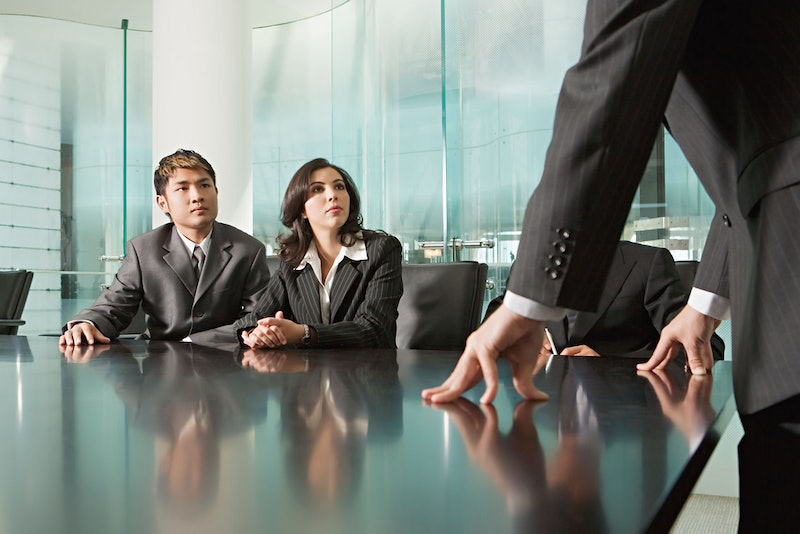 There's little doubt that we need more women in positions of power— hell, Lean In became a bestseller based on this premise. The question is, how can we help ladies get top positions? Lean in as they may, there are still systemic biases that leave them at a disadvantage. Hence, gender quotas. But do quotas hurt more than they help? Peggy Drexler at The Daily Beast thinks so.

Norway got the gender quota ball rolling in 2003, when it mandated that 40 percent of board members be female. By 2010, women held 25 percent of board positions. France, Belgium, Spain, and Italy followed suit with their own quotas.

But what about the women gender quotas help, who may feel they are being promoted based on their gender?

The quota system — or, more specifically, the women pulled into power because of it — can suffer from the perception that companies are getting the best of a single and specific gender, and not the best, period.

Quotas are about giving opportunities that wouldn't normally be given to a group we know is at a disadvantage due to discrimination. By making the promotion of more women mandatory, people will have the opportunity to realize that these women at the top are actually capable leaders and beneficial to the company. By imposing the idea of female leaders, we are guiding people toward acceptance and even encouragement of women at the top.

Drexler cites a report in the Economist that argued,"to obey the law, Norwegian firms promoted many women who were less experienced than the directors they had before." This is the same Economist article that states, "Times have changed. These days no one doubts that women can run companies." I don't even need to refute that one, since the report does exactly that itself, a few paragraphs later: "While firms that discriminate a lot will be eclipsed by those that promote on merit (and possibly sued), that can take time," the article says. "And men do persistently underestimate women." The article then contradicts its own argument in a single paragraph:

The women that companies voluntarily appoint to boards are mostly excellent (indeed, they may have had to be particularly talented to overcome the barriers in their way). The effect of quotas, however, will be to elevate women who would not otherwise get onto the board. It would be surprising if they proved as able as those appointed without such help.

Hmmm. Something's missing here, between "they may have had to be particularly talented to overcome the barriers" and "it would be surprising if they proved as able as those appointed without such help." What about the women who are as qualified as their male counterparts, except for the fact that they are female?

Drexler glosses over this same notion of gender holding us back. "Women whose hard work earns them professional success may find that their achievements are downplayed in the shadow of enforced quotas," she writes.

This all smacks of post-feminism. Undoubtedly, these women are at least as successful as their male counterparts. Yet discrimination is still very much a fact of life in most workplaces, and to deny the positive effect of balancing policies like gender quotas is to have a individualist viewpoint that discounts the difficulties most women face when trying to get ahead. Undoubtedly, the quota system is far from perfect. But when people still doubt whether women can run companies, we evidently need gender quotas, at least for now, to prove them wrong.