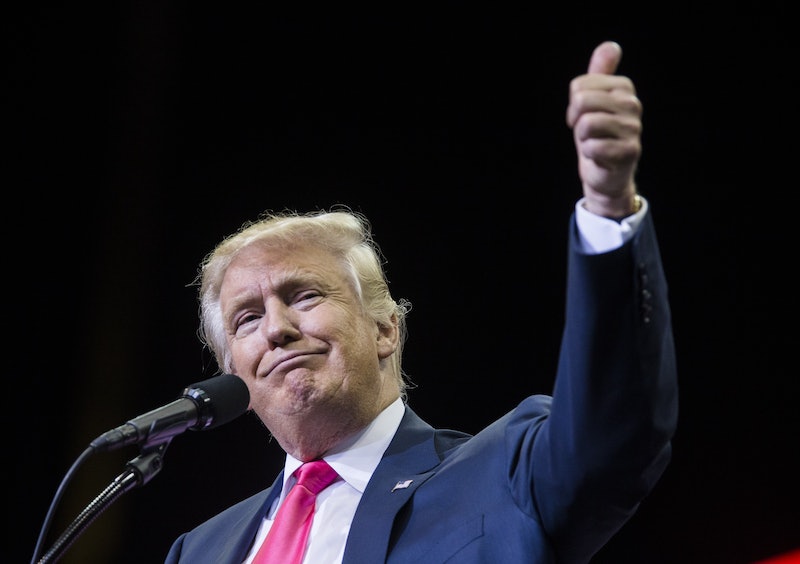 When Marco Rubio made an offhand comment on the off-size of Donald Trump's hands, he opened up a Pandora's box of phallic pronouncements heretofore unconceptualized in an American presidential contest. Trump has famously and repeatedly defended the size of his mitts (and by extension, his manhood) to the media. But just how large are the GOP presidential nominee's hands? Check out how you compare to Trump with #TrumpMyHand.

Some reporters at The Hollywood Reporter had the fun idea to slightly subvert journalistic norms and publish a secondhand account as fact, for the sake of ending the argument once and for all. Forgoing asking Trump for a life-size tracing of his hand, these journalists went to Madame Tussaud's in New York to measure the replica of the media mogul's mitts mounted on a plaque outside the entrance to the exhibit. The results frankly won't surprise anyone who has seen the controversial presidential candidate on television or in person.

Apparently, according to these measurements, Trump's hands come in as being just slightly over seven and a quarter inches long from wrist to the tip of his middle finger. You can check out for yourself just how your hand compares to that of the Republican nominee and nuclear war enthusiast here.

While there's no word yet on how Hillary Clinton's hand measurements stack up to Trump's — ditto for Jill Stein or Gary Johnson — I took the time to compare my hand size to the GOP nominee's, to rather amusing results. Mine are 7.38 inches — just a smidgen longer than Trump's.

While I have long lamented the fact that my fingers seem just a shade too small to make any kind of headway on the guitar, apparently my hands are still slightly larger than Trump's happen to be — if the data from THR is to be believed, anyways. In fact, it looks like there may be a fair number of people who can claim that their paws are larger than The Donald's.

Sidestepping the obvious Freudian connotations, it seems like the issue of Trump's hand size could potentially become a key issue in the campaign, if only for exposing just how the Republican nominee reacts to stress resulting from perceived attacks against his person. A sobering thought, given the real-estate scion's thoughts on nuclear war, international cooperation, and civil rights. So check out how you stack up to the Donald with #TrumpMyHand — you could be more similar to the controversial candidate than you think.