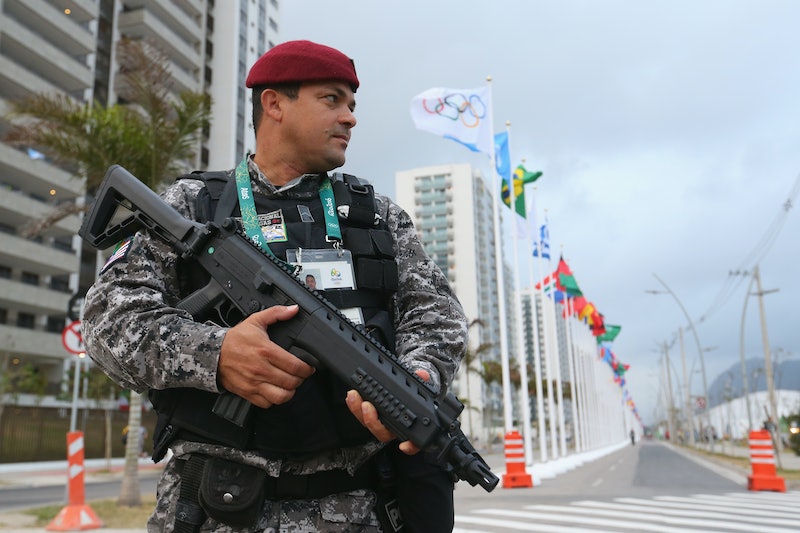 Rio de Janeiro has not historically been known for safety, but in recent years, police forces have retaken large parts of the city from drug lords. Pacifying police units, as they are called, patrol some of the city's formerly violent neighborhoods and ensure peace for residents on a day-to-day basis. But the Olympics provide a different sort of challenge. Some half million tourists and sport fans will be in the city. Also, ISIS made threats in Portuguese against the games. Given the high stakes, security at the Rio Olympics opening ceremony will be based on best practices learned in the United States.

The New York Times reported that Brazil's intelligence agencies and security forces are working closely with American counterparts to ensure the safety of attendees at such a high-profile event. One of the ways they did this was bringing Brazilian law enforcement and military to the Super Bowl in February. That way they could see the way the U.S. public safety agencies prepare for and carry out the logistics of protecting such a large-scale event.

There's good reason for this. The opening ceremony, logistically, will be like a Super Bowl, just with people from all over the world. At the 2016 Super Bowl in Santa Clara, California, there were 71,000 people in attendance. The Rio opening ceremony will be at Rio's Maracanã Stadium, originally opened in 1950 and renovated for the World Cup in 2014. It seats nearly 79,000.

The stadium is not in the same area of the city as the Olympic Village. It's further north and east, closer to the downtown, while the Olympic Village is in Barra da Tijuca, a more residential area farther to the southwest, along the ocean. That means spectators and athletes will need to be kept safe on their way there, too. Some 47,000 police officers and 38,000 soldiers will be on patrol in the city to make that happen — a number which was increased by nearly a third more than what was originally planned.

Upon entering the stadium, and any Olympic venue, visitors will be searched and their belongings will be put through X-ray machines. This has been one of the hiccups in the security plan. A private company that was hired to perform this part of the plan has been fired by the Brazil Ministry of Justice in the first week of August. The firm had hired just 500 out of a promised 3,400 security officials. Now, local police will be carrying out these functions. But despite these hiccups, the security has been increased from the original plan, which will likely make things run smoothly and safely.