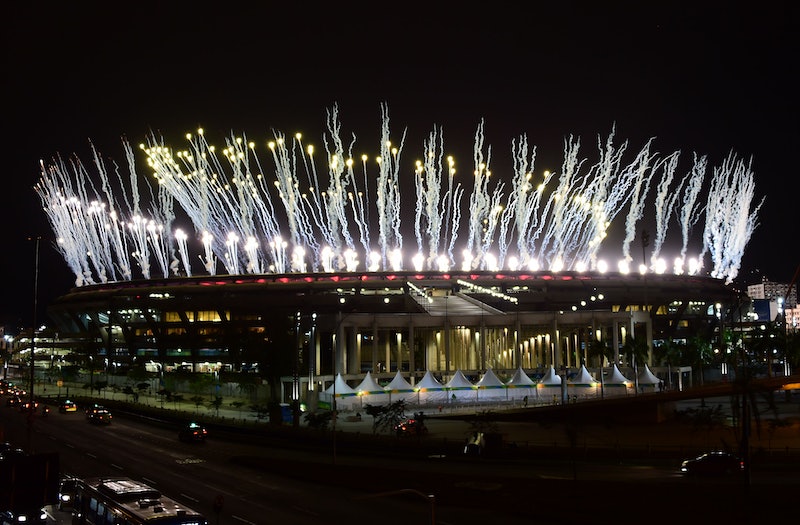 The Olympics opening ceremony is always an extravaganza, utilizing a particular showmanship that allows each country to show off its best athletes with fire works, pyrotechnics, and pageantry. But the opening ceremony for the 2016 Olympics in Rio de Janeiro has taken a cue from its host country, and scaled back the effects in respect of Brazil's economic recession. Some countries' athletes, like Britain's extremely small parade delegation, have also decided to skip the ceremony altogether. So with the celebrations significantly minimized, will there be some countries that aren't in the opening ceremony at all?

According to recent reports, it doesn't appear that will be the case — all 206 countries competing in the games are also scheduled to appear at the opening ceremony. They will be introduced during the Parade of Nations, when each country marches through the stadium to give the world its first glimpse of its team's top athletes. As is customary, Greece will be the first to enter Maracanã Stadium (as it served as the original home to the Olympic Games), followed in alphabetical order until it reaches the final group from host country Brazil.

But despite all of the countries being present, there will be an exception to the Rio opening ceremony.

For instance, one group making their debut at the Rio Olympics will not be represented by a country at all: the Refugee Olympic Team. This team will be the first of its kind, bringing in displaced refugee athletes to compete during the games. The athletes hail from Syria, South Sudan, Ethiopia, and the Democratic Republic of the Congo.

And even though the team is not united under one country, they will be united under one flag during the opening ceremony. Each member of the 10-person team will serve as a flag bearer for the symbolic Olympic flag, which will be brought out near the close of the Parade of Nations. The International Olympic Committee's decision to usher in a refugee-based team, as well as use them to bring out the coveted Olympic flag, is meant to serve as a symbol of hope to the world's displaced refugees. They will mark the occasion right before Brazil is scheduled to enter the stadium.

So despite Rio's decision to not go all out on the decorations for the opening ceremony on Friday, the excitement for the 206 countries — with the inspiring addition of the Refugee Olympic Team — will certainly be fully present nonetheless.

More like this
How To Fight For Reproductive Rights, Based On How Much Time You Have
By Courtney Young
Chelsea Woody On Shattering Stereotypes In Surfing
By Leah Groth
Jake Daniels Just Became The UK’s First Active Football Player To Come Out As Gay Since 1990
By Sam Ramsden
What Is Jeanie Buss' Net Worth? The Lakers President Is Uber Rich
By Hugh McIntyre
Get Even More From Bustle — Sign Up For The Newsletter