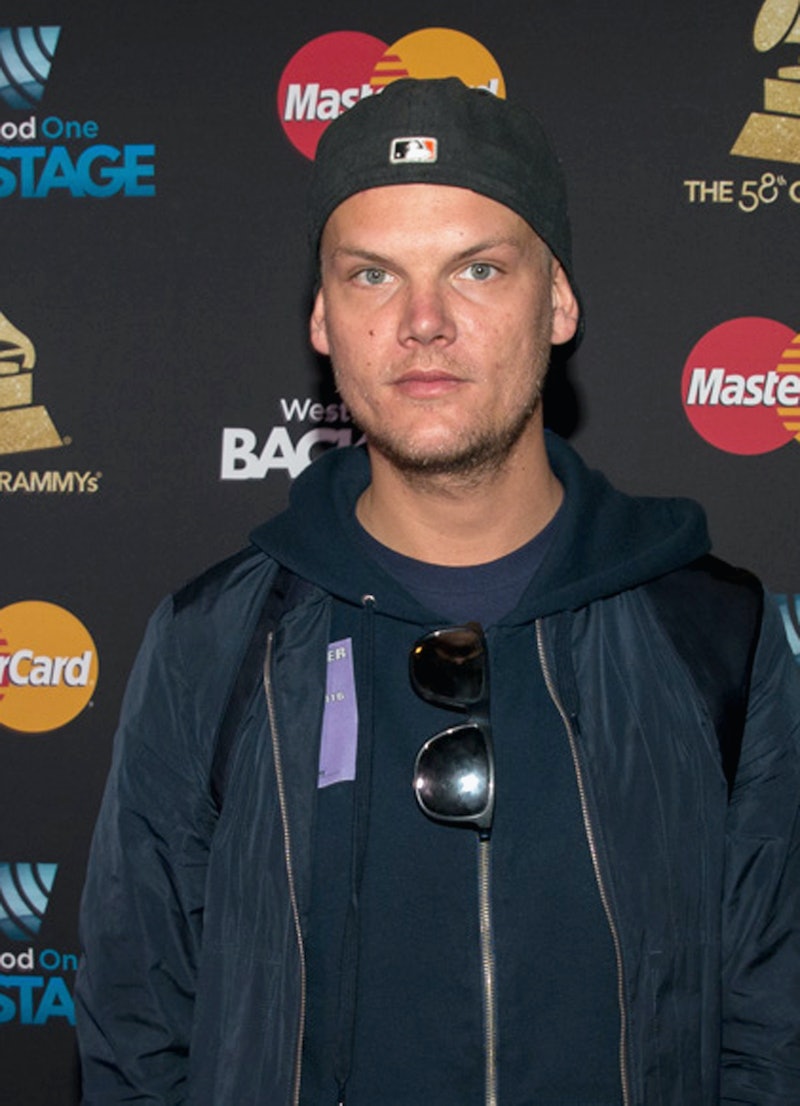 Over the past few months, Mike Posner's single, "I Took a Pill in Ibiza" has been all over the radio. Every time I get in my car, I hear it at least twice — and it's so catchy that it's not surprising it plays so frequently. But if you listen to the lyrics, they directly contradict with how upbeat the song is. It actually tells a really sad story about a once popular musician who spent all his money and struggles with being alone now that his 15 minutes of fame have passed. And since he plays a pretty big role in the song, what does Avicii think of "I Took a Pill in Ibiza"?

After all, not only is his name in the first line of the song when Posner sings, "I took a pill in Ibiza to show Avicii I was cool," but that one moment serves as the inspiration for the rest of the song. But don't worry — Avicii is totally on board with Posner using his name, and it's not just because it sounds good, either. The story told in the song is actually true and comes from a real experience Posner had, surprisingly enough.

And according to what Posner said in an interview with Billboard, not only was Avicii a fan of the song from the start, but he was also the first person to hear it. Posner said, "He's one of the first who heard it. He even gave me a quote for the press junket. We talked about him producing the song, but I thought, 'Nah, I got to do this on my own.'"

And do it on his own he did, because now the song is a major hit. And about the fact that Posner sings that he was trying to impress Avicii? That part really happened. While talking about the song to Genius, Posner explained the whole story, and it's actually pretty fascinating. He said:

"It was sort of a mystery pill. I was already under the influence of alcohol at the time. I had written a song with Avicii that week in Sweden called 'Stay With You' and he was playing in Ibiza so I said, ‘I will just go there with you,’ because I was already in Europe. I don’t have like a regular 9-5 job … so might as well go to Ibiza, right? I had never been there before. So I went. We were at his show and I was drinking at the time. (I don’t drink anymore, but I wasn’t playing and I had no responsibilities except for enjoying myself so I was taking some vodka shots and probably some whisky if I know myself.) And I just sort of moseyed out into the audience to watch Avicii spin from their point of view. I would go back and forth between the backstage and the VIP area and then where the actual kids were. And most people didn’t know who the f*ck I was in Ibiza except for this one guy who recognized me. He was like, ‘Are you Mike Posner?’ and he was all excited. He holds up this little bag of pills and is like, ‘You want one?’ And drunk Mike Posner was like, ‘F*ck it, yeah.’ So I took one and I had never done that before, and I felt amazing. Then when I came down I felt ten years older…"

No word on whether or not the pills he took actually made Avicii think he was cool, though — but judging by the way Posner tells it, it sounds like he has nothing to worry about when it comes to the producer. Now that "I Took a Pill in Ibiza" is so huge, I have a feeling he won't be worrying about impressing other artists for awhile!

More like this
Fans Think Adele & Rich Paul Have Bought Their First Home Together
By Sam Ramsden
Stormi Just Walked A Red Carpet With Mommy Kylie Jenner & Daddy Travis Scott
By Hugh McIntyre
Twitter Is Upset About The 'American Idol' Top 3 Results: "Who TF Is Voting?"
By Jake Viswanath
Is Megan Fox Pregnant? MGK Gave A Shout-Out To Their “Unborn Child” Onstage
By Hugh McIntyre
Get Even More From Bustle — Sign Up For The Newsletter