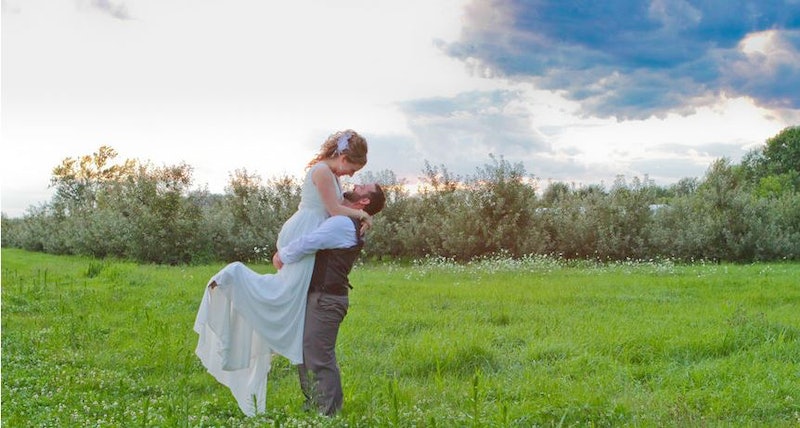 If you returned home from a six-month pilgrimage to your grandmother’s homeland to find that your significant other had planned you a surprise wedding happening right that very minute, what would you do? When this very thing happened to a bride named Carly, she was over the moon about it. Her fiancé, Adam, and her mother teamed up to turn what Carly thought was simply going to be an engagement party into a surprise wedding; the event went off without a hitch, and Carly and Adam got their very own happily ever after — including an adorable video capturing the day in all its matrimonial glory:

However, as sweet as this sounds, I can’t help but think that there are a number of situations in which a surprise wedding would be the worst thing that could possibly happen to someone. Things like, say, these:

1. You haven’t discussed getting married yet.

This is the same reason public marriage proposals often result in disaster — except in the case of a surprise wedding, it would be way, way worse. It’s bad enough getting shot down when you’re just popping the question. What if your intended says, “Uh… no thank you...” after you’ve gone to the trouble of planning an entire wedding? Yikes. Just yikes.

2. You’ve really, really wanted to plan your own wedding ever since you were a wee tiny one.

Some people start planning their weddings when they’re barely out of the womb. I am not one of those people, but if I were, I would imagine I would be pretty ticked off about not getting to plan my own wedding after all the time I’d spent dreaming about it over the years.

3. You’ve got that one relative who desperately wanted to help you plan your wedding and will never let it go that she was “cheated” out of the opportunity.

She’ll bring it up at every opportunity and she’ll always use it against you — even though you had pretty much nothing to do with the whole thing other than the fact that you showed up to the event. No one wants to deal with a lifetime of that.

Not only that, but you’ve made it as clear as you possibly can over the years that you hate surprises. If your significant other then goes so far as to plan you a surprise wedding…well, maybe he or she doesn’t know you as well as they should.

Just to balance it out, though, here are four times it might be a good idea after all:

That’s the kind of situation in which these grand gestures are romantic, rather than embarrassing. Also, when you ditch your glasses and let down your hair, your friends will all gasp and tell you, “Why, Miss Elphaba! You’re beautiful!”

2. You live in a Nicholas Sparks novel.

An alternative to living in a rom com. In this case, you and your significant other will have overcome a great obstacle, culminating in your absolutely perfect surprise wedding.

3. You want a wedding, but you don’t want to deal with the stress of having to plan one.

Sure, you may not have a say in what color the tablecloths are, but who cares? It’s your day and you didn’t have to lift a finger to make it happen!

Clearly your intended knows you inside and out — so well, in fact, that he or she planned you a surprise wedding, knowing that there’s nothing in the world you love more than surprises. It’s a match made in heaven.

Ah well. To each his or her own, right?