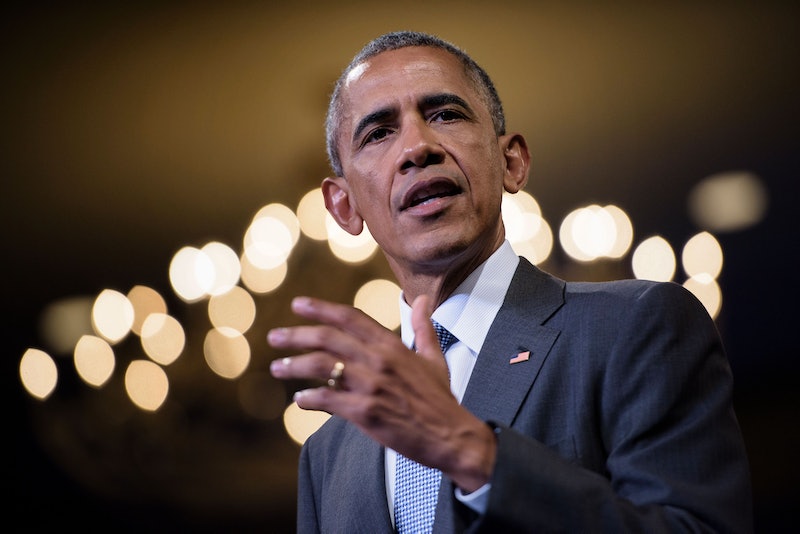 There are a lot of awesome feminist essays that you can read online, but there is only one written by the current president of the United States. And if you've been wondering how to read President Obama's essay on feminism, good news: It is but a click away. Published online by Glamour on Aug. 4, it's an important statement that honestly should be required reading for just about everyone.

President Obama has already publicly declared himself to be a feminist and has proved his feminist chops over and over through his actions while in the Oval Office. A lot of great things for women have happened under the Obama Administration, from his executive actions supporting equal pay to the fact that we're soon getting a woman on the $20 bill. Obama has been outspoken on issues like the gender pay gap and family leave. And he's also been, by all accounts, an awesomely supportive husband and father to the lovely ladies in the First Family.

This perhaps makes it unsurprising that in essay — which leads with the headline, "This Is What A Feminist Looks Like" — he happily talks about how his "45 second commute" from his living room to the Oval Office makes it easy to spend time with his daughters. While, you know, also running the country.

Throughout the Glamour essay, President Obama focuses not just on all the work left to be done, but also on all the progress the feminist movement has already made, saying that the world today is a better place for his daughters than it was for his grandmothers. Which is undeniably true, and also really awesome to hear from a president.

It's hard to believe that President Obama will be leaving office soon. After eight years in office, he and his feminist sensibilities will be sorely missed. But hopefully it will leave him more time to write awesome feminist essays, since apparently that's a thing that he does now!

Head on over to Glamour's website to Obama's feminist essay — and share it with everyone you know.

More like this
What Is Barack Obama’s Net Worth? He Makes *Way* More Now As An Ex-President
By Hugh McIntyre
How To Support Gun Control Reform Right Now
By Morgan Brinlee and Carolyn Steber
Sandra Bullock, Girlboss Extraordinaire
By Matt Harkins & Viviana Olen
The Church Of Scotland Votes To Allow Same-Sex Marriages
By Sam Ramsden
Get Even More From Bustle — Sign Up For The Newsletter