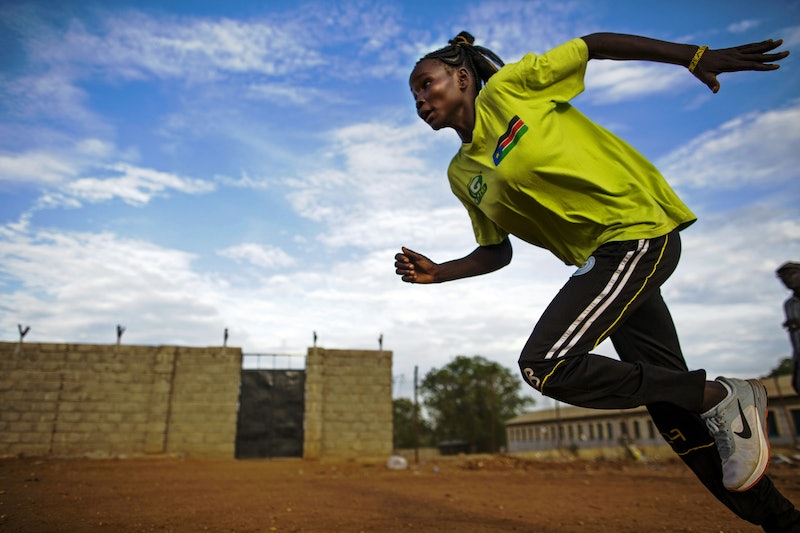 The Olympics are an exciting time, partly because it's just fun to mindlessly watch incredible feats of athletics that you could never accomplish, and partly to look and sound smart in front of your friends. Want some help with that? Let's talk about why South Sudan hasn't had an Olympian in the Games until now. This year, they're bringing three athletes — Santino Kenyi in the Men's 1500m, Guor Marial in the Men's marathon, and, most notably, 19-year-old Margret Rumat Rumat Hassan in the Women's 200m. But why is this their first opportunity to compete for their country? Well, the short answer is that it didn't exist yet — at least not in its current form.

Up until 2011, war-torn South Sudan was a part of Sudan proper, which has been a recognized nation and competing in the Olympics since 1960, although they have never medaled. But South Sudan gained independence in 2011, after a referendum, earning them the right to compete separately and send their own athletes. First, though, they had to be eligible for International Olympic Committee membership, which requires national sports federations to join both the South Sudan National Olympic Committee (NOC) and their international equivalents — like FIFA, for example — for five Olympic sports.

Basically they have to prove they're taking at least five sports seriously before they can officially throw their hat into the ring, and that didn't happen until 2015. So, even though a Summer Olympics did take place between the independence referendum in 2011 and the Rio Games in 2016, South Sudan was not eligible and could not send athletes.

What they did in between was allow their countrymen to compete as Independent Olympic Athletes, as Guor Marial did in London in 2012, and as Margret Rumat Rumat Hassan did at the 2014 Summer Youth Olympics in Nanjing, China. So, while these two athletes have had a taste of international competition, they've never been able to do so under their very own flag. Basically, this is a powerful moment, pretty perfectly reflected, I think, in Samsung's Olympic promo and featurette of Hassan.

I don't want to tell you how to live your life, but, if that didn't get you emotional, you're made of stronger stuff than I am and should maybe go to the Emotional Olympics. History has its eyes on South Sudan, and I, for one, wish them the best of luck.