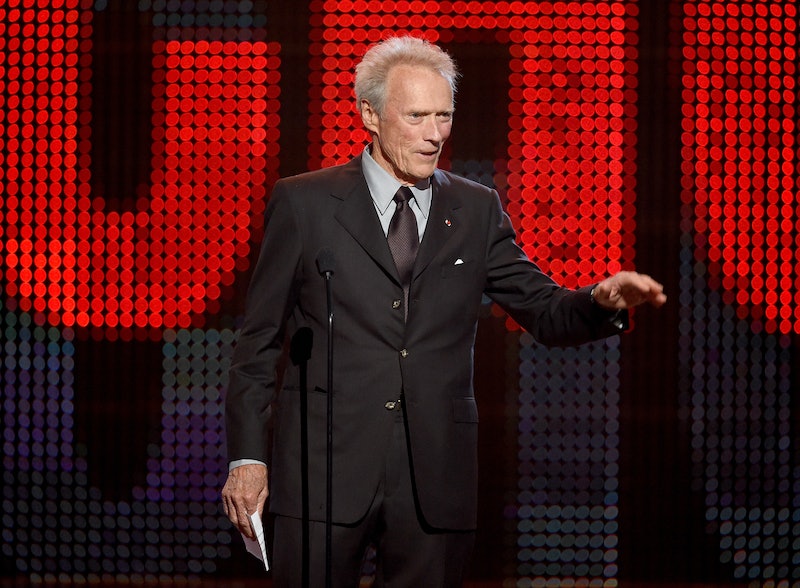 Clint Eastwood has some words for anyone critical of GOP nominee Donald Trump's racist rhetoric: Get over it. Over the course of his campaign, Trump has targeted the Muslim community, black Americans, and Latinos. Well, Eastwood's take on Trump's "racism" is everything you don't want to hear. The 86-year-old actor told Esquire magazine that Trump might be "onto something, because secretly everybody's getting tired of political correctness, kissing up. That's the kiss-ass generation we're in right now. We're really in a pussy generation." (It's absolutely not OK that Eastwood used the word "pussy" to describe people calling out identity-based systemic injustices, especially as he uses the sexist term in a derogatory manner.)

Since announcing his campaign last June, Trump has waged a war on what he calls "political correctness," applying the term to pretty much any issue facing the country. The term essentially calls out the use of exclusionary and discriminatory language or actions that one might associate with a given societal group. However, Trump has decried "political correctness" and the identity politics that are paired with the term. His daughter Ivanka even called him "colorblind and gender neutral," suggesting that he doesn't see or acknowledge the difference in people's day-to-day experiences based on their race or gender.

Well, Eastwood is certainly on board the Trump train. In his Esquire interview, he told the magazine, "Everybody — the press and everybody's going, 'Oh, well, that's racist,' and they're making a big hoodoo out of it. Just f****** get over it. It's a sad time in history."

However, as he wages his war on "political correctness," Trump's rhetoric is problematic and dangerous, and has silenced communities who face very real, often life-threatening discrimination. For the many people affected by Trump's comments, it is not only a matter of comfort and respect, but also one of safety. Fighting for human rights is not an issue of "political correctness."

Eastwood pointed out that while Trump is "just saying what's on his mind ... sometimes it's not so good." However, he also suggested that "Everybody’s walking on eggshells. We see people accusing people of being racist and all kinds of stuff. When I grew up, those things weren’t called racist." They may not have been called racist, but they definitely were.

The actor has not endorsed Trump but said he will be voting for the GOP candidate this fall.