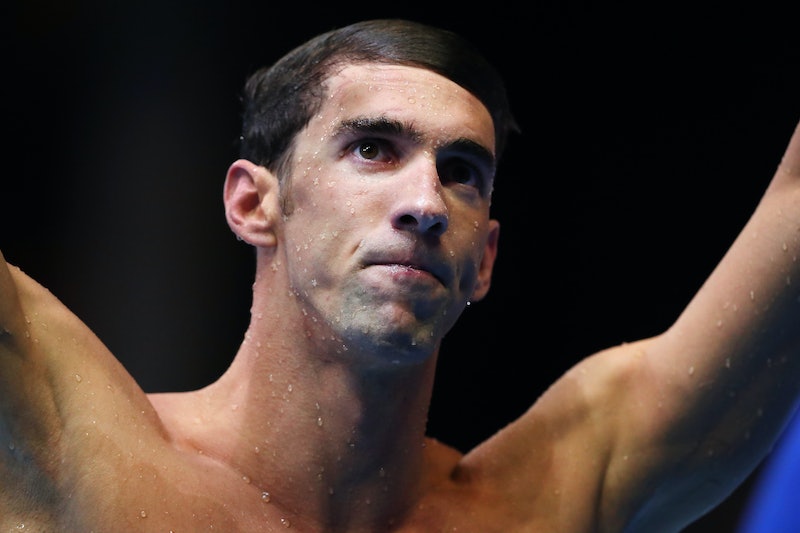 When it comes to Michael Phelps' family, you're probably well aware of his mom, Debbie Phelps, and his two sisters, Whitney and Hilary. However, the same can't be said for Michael Phelps' dad, Fred Phelps. Unlike the rest of the Olympic swimmer's family, Fred is rarely seen in the public eye, nor does he seem to be involved in his son's life and career. Basically, Michael and Fred haven't always had the best relationship, nor the father/son bond many children and parents hope for.

At nine years old, Michael watched his parents divorce and, understandably so, it wasn't an easy time for the 18-time gold medal winner. His parents were high school sweethearts, who married in 1973 and then split in 1994. "For me, not having a father always there was hard," Michael told Sports Illustrated in November 2015. "I had Bob [Bowman] and I had Peter [Carlisle], these guys who acted as father figures. But deep down, inside, it was really hard. That was something that was a struggle for me to talk about for a long time, even with friends or my mother. Getting that off my chest in therapy was this huge weight off my shoulders."

Even though Michael and Fred remained close after the divorce at first, they started to lose touch once his swimming career took off. "I kept trying and trying, but he always had something to do," Fred revealed in a June 2016 interview with ESPN magazine, which Michael participated in, as well. His mom, Debbie, also chatted with ESPN about Michael distancing himself from Fred. It appears, Michael's rise to fame may have influenced his rocky relationship with his dad. Debbie believed it was Michael's way of protecting her. "My ex-husband loved his kids. He loves his kids," Debbie said. "It bothered him. But I don't think he knew how to fix it. So Michael just kept on escalating and escalating and things were going OK, so he didn't feel like he needed his dad."

Despite years without communicating, the two managed to find their way back to one another. It all started in 2014 at Phoenix, Arizona's The Meadows, a treatment facility Michael attended after his second DUI arrest. He invited his dad to family week, where the two hugged and had quite the moment. "[Michael] said, 'I didn’t know if you would come,'" Fred told SI about the visit. "I said, 'You’re my son. Why wouldn’t I come?’'"

In the same interview as his father with SI, Michael said about their overall relationship,

"I felt abandoned. I have an amazing mother and two amazing sisters. But I would like to have a father in my life, and I’ve been carrying that around for 20 years. That’s a long time. It does something to you. To a kid, especially. Right now I’d like to be able to talk to my father and have him be able to talk to me. Is my family perfect? Far from it. My parents had issues where they thought it was healthy to split. It wasn’t ideal. It wasn’t easy. But what we went through as kids made us as strong as we are. And now my father and I communicate. It’s not fixed. You don’t fix something like that. But it’s better."

Since that moment at The Meadows, the two have maintained a healthier relationship, which means the world to Fred now that Michael is also a father. "I'm proud of the fact that he found himself and knows who he is now," Fred told ESPN. "He sees now that there is a tomorrow way down the road. It's real life. He's going to be a human being. A father. A husband. A friend. He's going to be a son." At the time of the interview with ESPN, Fred was still unsure if he'd go to Rio to support Michael at the 2016 Summer Olympics.

Whatever the case, Michael is grateful for how far they've come. "Would I like to have a father? Sure," Michael pondered to ESPN. "Is it possible at this point in my life? Who knows? You were gone for so long; I'm sorry, you're not going to walk in now and pick up where you left off. But it is good to finally have the friendship that I always wanted."

He also told ESPN that all of this has influenced his role as a father, "I've learned a lot on the road that I've walked that will make me a better father and help me not make some of the same mistakes."

More like this
Jake Daniels Just Became The UK’s First Active Football Player To Come Out As Gay Since 1990
By Sam Ramsden
What Is Jeanie Buss' Net Worth? The Lakers President Is Uber Rich
By Hugh McIntyre
Harry Styles Addresses The Theory That His New Song "Daylight" Is About Taylor Swift
By Jake Viswanath
Is Megan Fox Pregnant? MGK Gave A Shout-Out To Their “Unborn Child” Onstage
By Hugh McIntyre
Get Even More From Bustle — Sign Up For The Newsletter