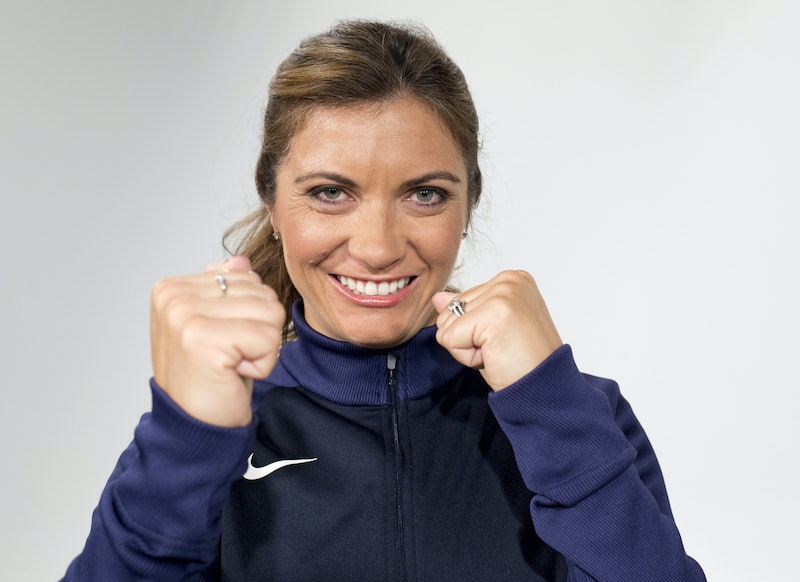 When beach volleyball kicks off in the Olympics on Saturday, you may find yourself missing volleyball superstar Misty May-Treanor. She and partner Kerri Walsh Jennings won gold together three times, and are widely recognized as one of the greatest beach volleyball teams ever. But where is Misty May-Treanor now? Bustle reached out to May-Treanor’s rep for comment, and we’ll update if we hear back. Nevertheless, the former Olympian, now 39, seems to be loving her post-Olympic life — she’s coaching, playing, and looking forward to watching the games in Rio from the comfort of her own home.

Misty May-Treanor played beach volleyball in four consecutive Olympics, starting in the 2000 games in Sydney. Though she finished fifth in that tournament, she would go on to dominate the sport for the next decade, returning to the Olympics in 2004, 2008, and 2012, and winning gold in all three games with partner Kerri Walsh Jennings (who is vying for her fourth medal in Rio this year). May-Treanor retired from the sport after her gold-winning performance in London, but in the years since, she has continued to be active in the volleyball world, while taking on new challenges.

In her 2010 autobiography, Misty: Digging Deep in Volleyball and Life , published before she competed in her final Olympics, May-Treanor suggested that she was looking forward to life outside of competition. “Over the years, I've made many sacrifices to win two Olympic gold medals and put together winning streaks that will never be broken,” she wrote. “And now I want to experience life. I want to kick back and enjoy. I want to breathe. I want to experience something as simple as summer.”

One of the experiences she said she most wanted was to become a mother, and in 2014, May-Treanor and her husband, former professional baseball player Matt Treanor, welcomed their first child, a daughter named Malia Barbara. At the time, she tweeted, “Wish I could sleep like our baby girl. Motherhood is the best!!!”

In an August 2016 interview with WDIV Detroit, she said that spending time with her family is a major priority, remarking, “Time as a family, I think is a lost art. Now especially, knowing how precious that time is. I'm actually making up for lost time since I had to sacrifice so much being an Olympic athlete.” Recently, she partnered health care company Abbott for a video series that encourages family fitness.

Although May-Treanor announced her retirement from beach volleyball in 2012, she has continued to play competitively on occasion. However, she seems to have mostly turned her sights away from her own performance on the court so that she can focus on helping other players. In 2013, she earned her master’s degree in coaching and athletic administration, and, this summer, she took on the position of head volleyball coach at Long Beach City College. Although some might express surprise at the fact that one of the most famous volleyball players in the world has chosen to coach at a community college, as opposed to a major university, May-Treanor said it was a clear choice for her. “A lot of people want to coach in the NCAA, I’ve always wanted to coach at the community college level,” she told the Long Beach Press Telegram . “I love working with those athletes, both my parents coached at Santa Monica Community College when I was growing up. That’s what I was raised around.” In a Facebook post about her new job, she wrote, “It has been a passion of mine to coach and continue to grow our sport. … I always just want to make a difference and inspire others to achieve their goals.”

May-Treanor isn’t going to Rio for this year’s Summer Games, but she certainly doesn’t seem sad about it. In a recent interview with KUTV, she explained that she’s looking forward to simply being a spectator this time around, something she hasn’t gotten to do since 1996. “As an Olympic athlete, when you’re competing during those two weeks, you’re so focused that you don’t really get a lot of time to go out and see the other sports,” she said. “So I’m looking forward to being able to turn on the TV and watch the different variety of sports.” In addition to indoor and beach volleyball, May-Treanor will be tuning into the swimming competition (her daughter’s favorite, she says) and track and field.