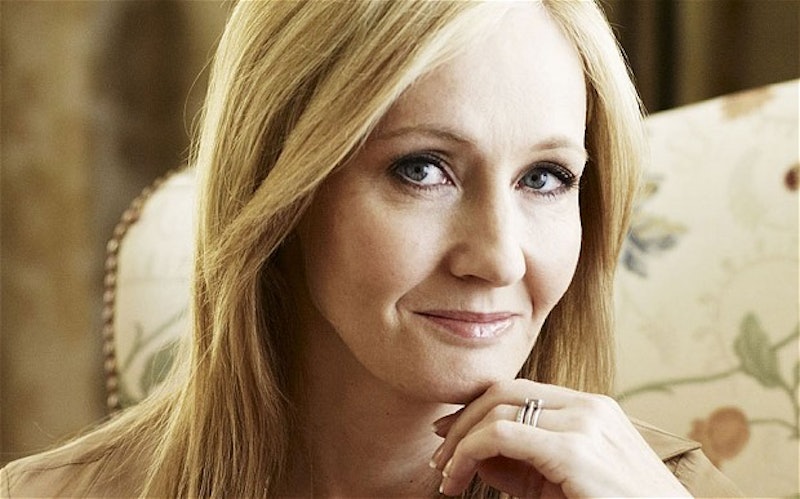 Let me not bury the lede here: J.K. Rowling wrote a secret book!

Since she finished the Harry Potter series way back in 2007 (is my childhood really so far away?), J.K. Rowling has, it turns out, published not one book but two. Although her novel The Casual Vacancy was published under her own name, her new crime novel, The Cuckoo's Calling, was published under a pseudonym: Robert Galbraith. Yet thanks to an anonymous tweet to a reporter from The Guardian, Rowling’s identity was revealed, and fans are going crazy. The novel went from selling fewer than 500 copies to being a bestseller, those who unwittingly passed on it are highly embarrassed, and Rowling and her team are scratching their heads as to who would have leaked the information.

We’re curious about something else: Rowling’s decision to use a male pseudonym. Presumably Rowling and her publishers decided to go that route because they assumed that a crime novel by a male author would sell better (though since using a pseudonym at all means Rowling clearly didn’t care about the sales numbers, maybe they just thought a male name would be better suited). This isn’t the first time the publishing industry has tried to mask Rowling’s gender; she originally published under J.K. Rowling because publishers were worried that their target demographic of young boys would be less likely to read a book by a woman. Well, we can only hope that Rowling’s success with stories that ought to be written by men will start showing publishers that there are no "male books" and "female books", and that women can do quite well in any genre.

More like this
Romance Authors Are Mobilizing For Reproductive Rights
By Natalia Perez-Gonzalez
This Episode 6 Moment Foreshadows Viserys' Fate On 'House Of The Dragon'
By Grace Wehniainen
Nicola Coughlan Shared A Lady Whistledown Excerpt From ‘Bridgerton’ Season 3
By Grace Wehniainen, Alyssa Lapid and Sam Ramsden
Ling Ma Is Back — This Time, With Yetis
By Kate Dwyer
Get Even More From Bustle — Sign Up For The Newsletter