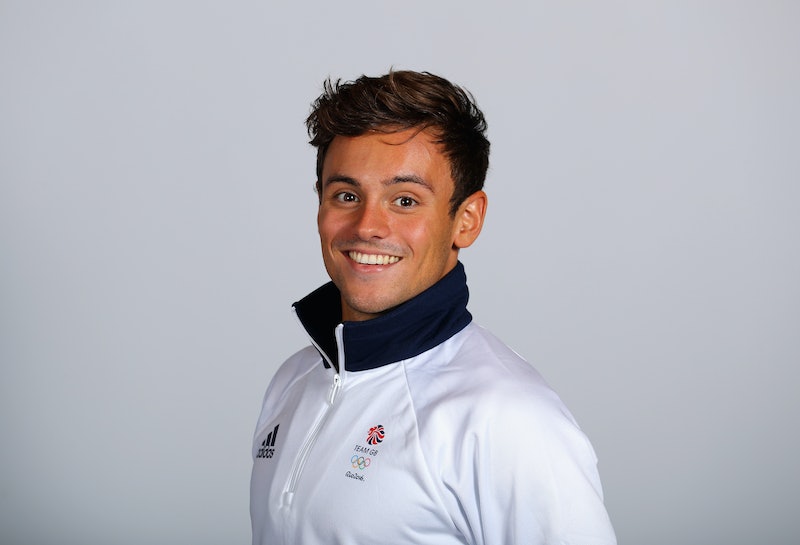 There's so much Olympic excitement in front of me that I almost don't know what to do with myself, but let's start with first things first. Is Tom Daley at the Opening Ceremony? The answer is no, Daley is not at the Opening Ceremony, which is a bummer, but also makes sense, because he's likely resting up for his first event on Aug. 8. Or, you know, tweeting about watching it from the village. While the tweet itself was very confusing — Daley is wearing his opening ceremony gear, but says he'll be watching the ceremony from the village — it seems like more of a negative statement than a positive one. After all, why would he need to watch something he's marching in?

Daley is a British diver who has also expanded into other areas like TV hosting and mentoring because of the success his athletic endeavors have brought him. He began diving when he was just 7-years-old, and, though he's just 22, Rio is his third Games, if you can believe it. In Beijing in 2008, Daley was the youngest Brit anywhere in the Games, but still managed to come in seventh and eighth in Men's 10m Platform Diving and Men's Synchronized 10m Platform Diving, respectively, the same categories he'll be competing in this year.

Four years later, he was in London for the 2012 Olympics, where he pulled away with a Bronze and a fourth placing in the same two categories. So, if we continue in this same pattern, Daley should have a pretty good look at a Silver or maybe even a Gold in those two diving events. In his own words, he's been training "six hours a day, six days a week" in preparation for this huge moment.

Regardless of the pressure put on by a once-every-four-years event such as the Olympics, Daley has plenty else going for him. In addition to all manner of medals of different metals at diving competitions from the British National Diving Cup, the FINA Diving World Cup to the World Championships to the European Championships, he has a burgeoning career in the entertainment world. You've glimpsed him on shows like Tom Daley Goes Global and the now-cancelled diving competition show Splash!

And, of course, he's also in a high-profile relationship with Dustin Lance Black, who has an Academy Award for directing Milk; the two have been a couple since 2013, and became engaged in 2015.

More like this
Jake Daniels Just Became The UK’s First Active Football Player To Come Out As Gay Since 1990
By Sam Ramsden
What Is Jeanie Buss' Net Worth? The Lakers President Is Uber Rich
By Hugh McIntyre
Watch The Dramatic First Trailer For Netflix's Jennifer Lopez Documentary
By Alyssa Lapid
Lisa Marie Presley Reviewed Baz Luhrmann’s ‘Elvis’ Movie On Twitter
By Grace Wehniainen
Get Even More From Bustle — Sign Up For The Newsletter