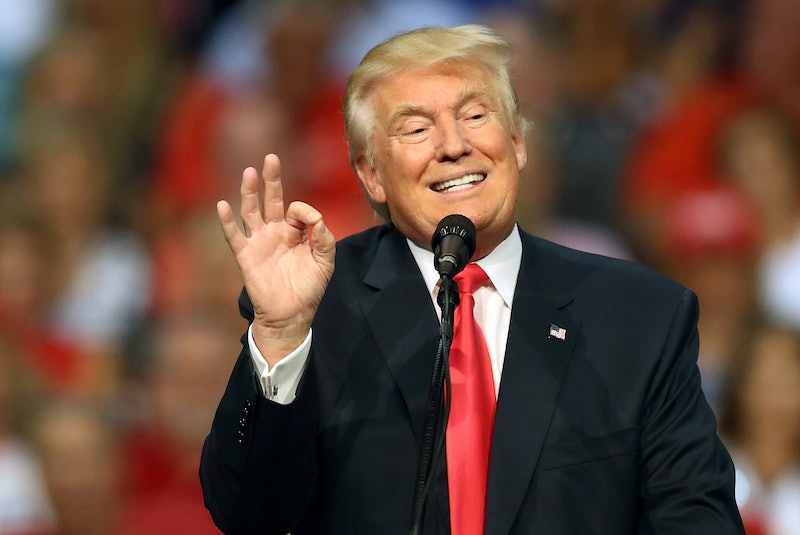 The first time I saw #DiagnoseTrump, I felt a dizzy, sinking feeling. It seemed like a natural extension of the ongoing rampant speculation about whether Donald Trump is too "crazy" to be president — hashtags or it didn't happen, am I right? But it got even worse when a press release popped up in my inbox and I discovered that it was pegged to a Change.org petition written by California Representative Karen Bass (D). According to the Hill, Bass, who worked in the mental health field prior to her election, says that he's displaying symptoms of Narcissistic Personality Disorder, and calls on mental health professionals to demand that the GOP conduct a mental health evaluation of their candidate.

The rhetoric over whether something is "wrong with" Donald Trump has really escalated in the last week, between his bizarre battle with the Khan family, his fight with a baby, and a variety of other activities. His seemingly erratic, inexplicable, and troubling behavior seems to have ramped up since the RNC, as though once he secured the nomination, he could do whatever he liked.

Every time I log onto Twitter, there are people armchair diagnosing Trump with a slew of psychiatric conditions. Personality disorders are popular, but so is sociopathy, an incredibly poorly understood diagnosis that tends to get slapped at random on people who do things other people don't like. I'm not going to lie: It hurts.

I was misdiagnosed with a personality disorder in my teens, and I'm seeing that diagnosis thrown around a lot. I see my actual diagnosis making some headway, too. "But we don't mean you," people say when I call them on it. "We mean actual crazy people."

In attributing something to "mental illness," people act as though it's something innate. It can't be helped. It's just the way someone is. That person is irredeemable. And no sane or reasonable person would behave that way.

Well, guess what: I'm an actual crazy person, and you need to stop it. You can't arbitrarily declare that people who do things you don't like are crazy, as though their actions can just be neatly dismissed. This is a problem that's been occurring more and more lately, with laypeople rampantly labeling anyone who does something horrific as "crazy."

There are a lot of reasons why calling Trump crazy is really not okay, but let's take the big three.

Mentally ill people face tremendous stigma and social barriers — so much so that many of us continue to remain in the shadows, obscure our diagnoses, and sometimes try to conceal the fact that we are mentally ill at all. Not all of us are someone like Demi Lovato, who has the political and social clout to openly talk about her bipolar disorder at the DNC. Being known as mentally ill can have huge personal, career, and social consequences, especially when we're talking about severe mental illness (SMI) or personality disorders.

People have a perception of mental illness as "bad," which is why terms like "crazy" and "insane" get thrown around as pejoratives. If being mentally ill were value neutral, these things wouldn't carry such a sting.

When you casually diagnose people you don't like with mental health conditions, it sends a pretty clear message to those of us who are mentally ill.

In attributing something to "mental illness," people act as though it's something innate. It can't be helped. It's just the way someone is. That person is irredeemable. And no sane or reasonable person would behave that way.

Racism, xenophobia, Islamophobia, and misogyny are not pathologies.

They are learned behaviors. Donald Trump is the way he is because of who he is — a powerful, privileged man who's gotten everything he wanted in life in a culture where these behaviors are tolerated and sometimes actively rewarded. Many Trump supporters hold many of the same ideas he does, because they're acculturated to them.

This #DiagoseTrump meme allows people to avoid the fact that we need to have a serious conversation about society, and the monsters of our own creation.

This isn't just about stigma, but about assignations of our worth. When I hear that Donald Trump is crazy and that means he can't be president, I hear that people think the crazy people are "incompetent" — a medicolegal term that's used to deprive mentally ill people of their autonomy, placing them in conservatorships. People under guardianship can't own property, make their own decisions (including marrying), or even vote.

According to to NAMI, 25 percent of Americans deal with the symptoms of mental illness in a given year, and nearly four percent of Americans overall are living with SMI, according to the NIMH. Are we all incompetent? Are we incapable of contributing to society? Should we be locked away? A study that appeared in the American Journal of Public Health in 2015 found that we are actually often less dangerous than sane people. But thanks to centuries of stigma, we are persistently devalued in society.

If you're going to armchair diagnose (which the APA ethics guidelines say mental health professionals should not), The Journal of Mental and Nervous Disease probed into mental health and the presidency in 2006, looking at the first 200 years. The researchers found that roughly half of the nation's first 37 presidents exhibited some symptoms of mental illness, including anxiety, depression, and bipolar disorder. Some of these men may have been unfit to be president, but their mental illnesses weren't the reason.

Saying that mental illness makes people inherently unfit devalues our contributions to society, and the vital and lively role we play.

When I see #DiagnoseTrump, I hear that you think I'm a garbage human who doesn't belong in society, and that I have nothing of worth or substance to add — and that you aren't interested in engaging with your own complicity in the creation of people like Donald Trump.