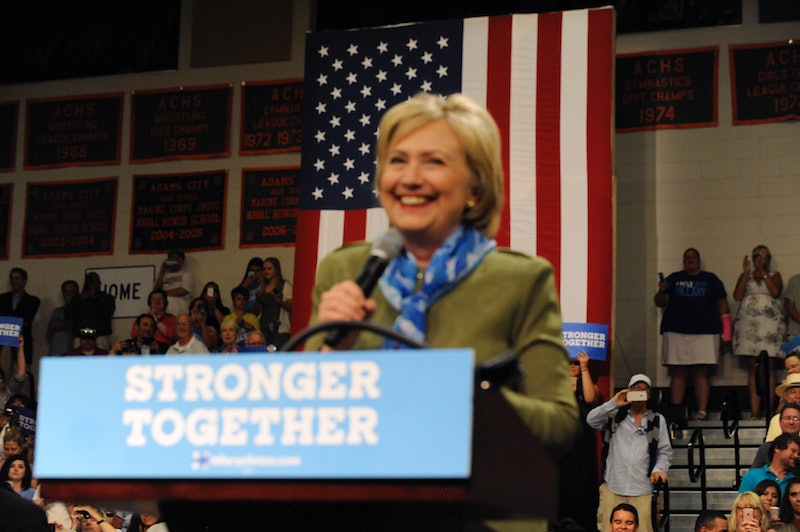 Hillary Clinton has been campaigning hard and is as close as she's ever been to clinching the presidency after decades of serving the federal government. Donald Trump has appeared to be a gift this election season with all of his horrendous missteps, and it looks like Clinton could have the presidential prize she's been seeking for more than a year (arguably, even, since her 2008 stab at the presidency). But could it be even easier if the Donald tanks and even quits (or is replaced by GOP leaders)? Does Clinton win automatically if Trump drops out or loses?

It's true that in may ways, Trump has been one gilded gaffe after another for Clinton. In the first place, the former secretary of state with a stronger-than-anyone-ever resume was tasked with running against a reality TV media star, the same guy who promoted the wildly unfounded birther movement against Barack Obama and has filed for bankruptcy four times. And all of that occurred before the 2016 election cycle even started. During this campaign, Trump has made repeated racist, sexist, xenophobic remarks, and most recently, has blithely insulted veterans and babies, a feat by any measure.

Currently, according to a Fox News poll released Thursday, Clinton is beating Trump by 10 points nationally. Some have wondered if Trump will drop out because things have turned so bleak. If Trump lost or if he quit, would it be the slam dunk that Clinton's campaign could have only dreamed of?

It's complicated. For one, Clinton still needs to beat Green party candidate Jill Stein and Libertarian candidate Gary Johnson. However, neither of those third-party candidates poses much of a threat at the polls.

The bigger problem, though is that even if Trump quit, Clinton would still have to reckon with his supporters. Trump has openly relied on the dog-whistle politics and anti-government sentiments, despite, perhaps, the party's best efforts. Trump has stirred millions of people who feel they have been overlooked by the government and can't trust its leaders. Therefore, even if Trump dropped out, Clinton would be left to deal with this mass of Americans who believe they can't trust the government. How she'll get them to trust her, especially when she already has some trust problems, could be a massive challenge to her prospective presidency.

If Trump quit, Clinton would win — but she would be left with the mess that Trump left behind.