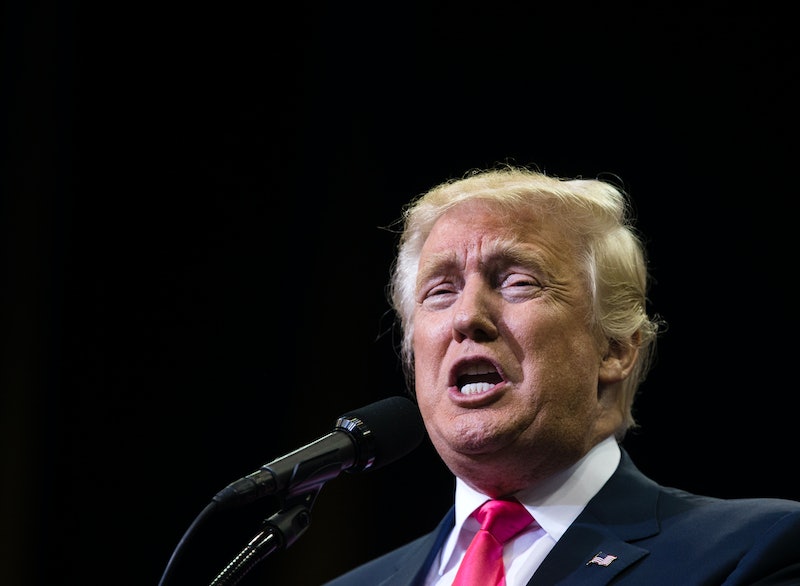 The Trump campaign is one so steeped in xenophobic insults and outlandish, headline-manufactured statements that it will most certainly go down in the history books as one of the most explosive campaigns this country has seen since the mudslinging days of Andrew Jackson. And while Trump's routine spewing of divisive insults is hardly news — some infamous ones range from the mocking of a reporter with disabilities, to suggesting Sen. John McCain is not a war hero because he was a POW — recent comments made by the Republican presidential nominee have dropped to such unfathomable lows that it has sparked speculation as to whether Trump might be throwing the election. But has a presidential nominee ever dropped out? While the answer is yes, Trump would be setting a modern precedent for dropping out of a presidential race after receiving a nomination from a major political party.

Is Trump actually contemplating dropping out of the race? The Trump campaign has given no indication that they are considering this option, but the fallout from comments Trump made about the Khan family after Khizr Khan, the father of fallen Army captain Humayun Khan, who died in 2004 from a car bombing in Iraq, appeared at the DNC and said that Trump "has sacrificed nothing," has caused some to wonder what extent possible GOP Trump defectors might have on the campaign. In addition, Trump's recent alleged comments regarding nuclear weapons has added fuel to the rumor that Trump's campaign might be nearing an end.

Although it is unprecedented for a candidate to walk away from the presidential election after receiving a nomination from a major party, there was one such Dallas billionaire who ran on the Independent ticket, as pointed out recently by MSNBC's Rachel Maddow. Electronic data business magnate Ross Perot dropped out of the 1992 presidential race after running as a third-party candidate. Perot, an eccentric and outgoing billionaire, who had poignant and critical campaign ads such as “Chicken Feathers, Deep Voodoo and the American Dream,” was unable to recover from some campaign mishaps, including an NAACP incident in which he referred to the attendees as "you people," and dropped out of the race the following month.

And there was also the Thomas Eagleton scandal, in which Democratic nominee from the 1972 race, George McGovern, had to drop his vice presidential pick, Missouri Sen. Thomas Eagleton, after it was leaked that Eagleton had undergone electroshock therapy for depression during the 1960s. Eagleton admitted to suffering from mental illness, but the times weren't as progressive back then as they are today. Eagleton withdrew from the ticket as the VP nominee, and President Nixon won the re-election in a landslide victory.

So what does all of this history spell for Trump? Well, for starters, while it isn't the most commonplace of occurrences, it is quite feasible and could very well happen if enough GOP lawmakers disavow the presidential candidate.

In the context of the current political climate, in which Trump seems to be battling a never-ending series of controversies, that occurrence isn't entirely impossible. According to a new McClatchy-Marist poll, Democratic presidential candidate Hillary Clinton now has a 15-point lead over Trump, and that lead may continue to widen if the Trump campaign endures any more scandals.