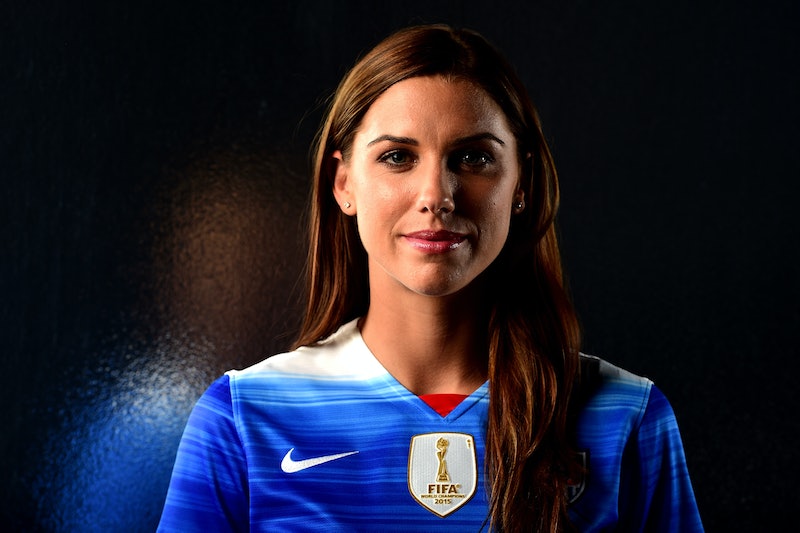 If you haven't heard of U.S. women's soccer player Alex Morgan, do yourself a far and get familiar: The brunette athlete began playing organized soccer at the mere age at 14, and since then, has turned the soccerverse on its head by becoming the youngest member of the U.S. women's national soccer team since 2009, and nabbing her first Olympian gold medal at the 2012 Summer Olympics Games. Now, as the games in Rio quickly approach — in particular, the opening of the event — fans may be wondering whether or not Morgan will be at the 2016 Olympics opening ceremony.

Well, as it turns out, Morgan was not actually present. This is a big surprise, as Morgan was already playing her heart out in Rio from Wednesday, as six women's soccer games already commenced in the city — but she had good reason. According to Morgan's Twitter, she was resting up in her hotel room in order to conserve her strength for the August 6 match against France during the games. She wrote: "Watching the #Olympics Opening Ceremony and wishing I was with @TeamUSA! But we have business to attend to tomorrow! #USAvFRA #BeloHorizonte."

The California-born star most recently lead her team to a victory over New Zealand scoring a goal just over 37 seconds into the second half of the game in August 2016 — nearly 25 seconds more than the 12 seconds it took her to score a goal during the first Olympic qualifier game in February 2016 (it's the fasted a goal has ever been scored in U.S. soccer history, FWIW). During the 2012 games in London, Morgan drew in 80,300 viewers — the largest soccer crowd in Olympics history — as she defeated Japan and take home the gold. Her victory marked the fourth Olympic title won by American women since women's soccer was first induced into the Olympics back in 1996.

"With women’s soccer, I feel like every day I’m fighting for equality, whether that’s fair grass soccer fields, whether that’s equal wages," Morgan continued. "Whatever that may be, I feel like the fight is existent and very much alive today, and I think it will be for a long time... My goal is to show girls that I‘m fighting so they don’t have to, so they don’t have to fight the same battles. When I was younger, Title IX was recently passed giving girls the opportunity to play sports in college and have equal opportunity as males like never before. The whole idea is that if we continue pushing and each generation fights for something that’s fair, something that’s equal, then eventually girls won’t have to fight for it. Eventually it will be the norm, and girls and boys and men and women will be equal."

Morgan's attendance at the opening ceremonies this year is a must and thankfully, her presence will further galvanize triumph and influence.