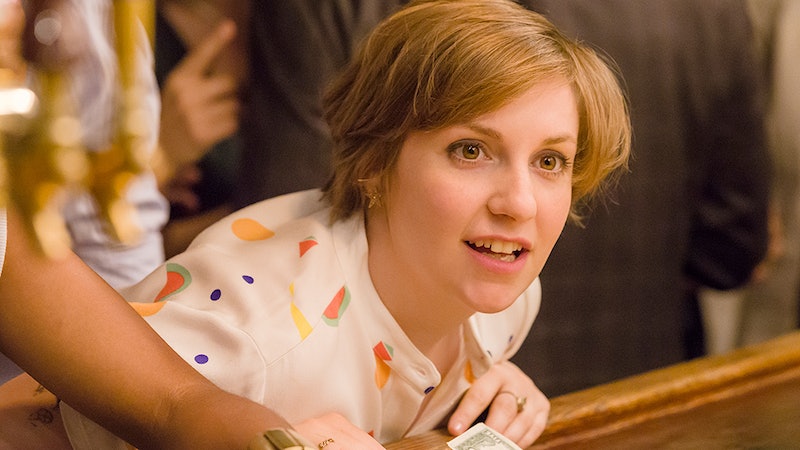 Sunday night on Girls, Hannah runs home to Adam after a night of belligerence with her coworkers. "I'm so sorry, I'm so sorry," she says, but what she is really looking for from Adam is not acceptance, but jealousy. Adam, though, is more concerned about his costume coat (he's method-acting now, so he has to wear his coat at home). The rest of "Role Play" proceeds accordingly, with both Hannah and Adam pushing and pulling at each other, struggling with the identities they want to fulfill as artists, and the identities they have in their very strained, long overdue-to-end relationship.

Hannah thinks that Adam and she need a change in their sex life, so she fabricates an entire scene wherein she meets him at a bar (not a great spot to meet your alcoholic boyfriend) in a blonde wig and, as we later see, a strappy corset worn over her signature granny panties. (She can't change entirely!) She takes Adam back to Marnie's apartment (apparently her role-play husband's pied-a-terre), but the situation goes sour when, during their little fantasy, Adam decides he doesn't like this foray into sexual adventure, that it's inauthentic. "You're so outside your body watching everything," he tells her. "I just want to have sex with you as just us... I'm not here to fill up your life with stories for your fucking Twitter."

It's a cold cut that goes deep, and Hannah knows it. She finally has to confront that her several identities—as girlfriend, as friend, as writer—are not exactly meshing well, and its bearing consequences. Adam wants Hannah fully and completely ("from now on, the rule is you have to have the whole thing, you can't just have part") but she's falling short. Throughout Girls, we've seen Hannah do things she wouldn't do normally as material for her essays (lest we forget the cocaine binge with Elijah in Season 2), but there's only so much we can blame her for that. That's her capital, her equity—her willingness to "do anything" for her writing.

But with Adam, she's been toeing the line between writer and girlfriend; to the viewer, it often feels like Hannah remains in this relationship with a complicated, confusing brooder just to have something to write about, and it becomes more and more transparent. She defends him to everyone; to her mother in the hospital and in this episode to Eliljah, saying "He's hard to get to know but once you do get to know him it's hard to imagine your life without him," but this not a breath after saying that Adam treats her like an ottoman with a vagina. Hannah has romantic notions of Adam as her Difficult Boyfriend that she Taught to Love, but it conflicts with her real-girl expectations of Adam as a boyfriend she wants attention from.

Girls is paying more and more mind to the different roles that Hannah takes on. Shoshanna epically exploded on her for being selfish and self-absorbed, and in this episode we see Hannah repeating her shitty friend behavior—she's not interested in anything her friends are doing unless it services her, a la Hannah asking Marnie if she can borrow Marnie's apartment for a sexcapade. It's becoming more clear that the Hannah Horvath that Hannah herself is prioritizing is Hannah the Writer, and it's leaving her alone and lonely. In fact, at the end of "Role Play," Adam tells Hannah he has to stay with Ray for a while to focus on his play.

No matter how much I dislike these two characters and think they shouldn't be together, I feel for both of them. They are both trying to understand themselves as artists and it makes them selfish; the pursuit of art is inherently selfish. But at the same time, for whatever reason, they do love each other, and they're realizing they can either choose to focus on their individual crafts, or try to work on their relationships.

It seems that Adam moving out for a time will be the impetus for Hannah and Adam to break up. This might do a service to the show; if Hannah doesn't have to worry about being a girlfriend, maybe then her personalities can reconcile. In Season 3 especially, she's felt disjointed; we've seen her be a very bad friend, a semi-successful writer, and an utterly confused girlfriend. Perhaps if Hannah and Adam split, she would be forced to face that grief of a breakup head-on, and become a more whole person instead of trying to wear so many different hats (or wigs).

We could use a little authenticity from Hannah Horvath.

More like this
'Gilmore Girls’ Lauren Graham Just Revived Our Hopes For A New Reunion
By El Hunt
This 'Derry Girls' Reunion Has Delighted Sister Michael Fans
By El Hunt
You’ll Most Definitely Recognise Kyle Pryor’s Soap Star Girlfriend
By Sophie McEvoy
These 'Law & Order: SVU' Throwback Pics Show 23 Years Of Shipping History
By Grace Wehniainen
Get Even More From Bustle — Sign Up For The Newsletter