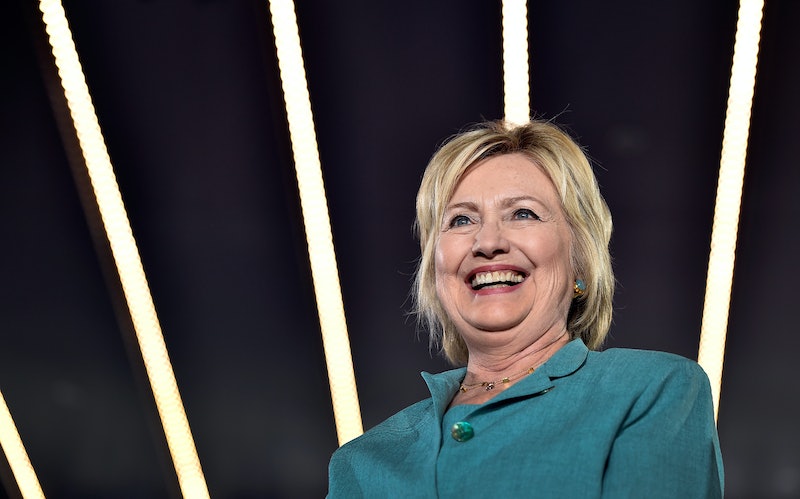 We all remember where we were when Hillary Clinton tweeted at Donald Trump telling him to "delete your account." I woke up from a nap to a text from my meme-hounding ex that said "omg, a Hillary staffer got a hold of her Twitter and tweeted the most hilarious thing at Trump." Turns out, it wasn't an unauthorized tweet — and it ushered in an era of Twitter beefs between the Democratic and Republican nominees that will go down in history. Hillary Clinton keeps dishing out Trump burns, this time by referencing another former Republican candidate who not-so-secretly despises the Donald. This election is really starting to seem like a spec script titled Mean Girls 3: The Race For The Presidency.

On Thursday afternoon, Clinton responded to a tweet by BuzzFeed politics editor Andrew Kaczynski that linked to an article about how Trump hasn't named any women besides his daughter Ivanka that he'd put in his presidential cabinet. Clinton responded in what has swiftly become a characteristic fashion, saying her campaign "knows a guy" who has a binder, referencing then-Republican nominee Mitt Romney's gaffe in the 2012 election season when he said he has "binders full of women" qualified enough to be on his potential cabinet. Clinton didn't stop there, though — she also proved herself to already be Burnmaster-in-Chief by casually dropping in parentheses that he might not take Trump's calls, a reference to Romney's public distaste for the Republican nominee.

Like all good burns, this joke has multiple layers of truth and hilarity to it. Romney dislikes Trump so much that he said a Trump presidency would bring about "trickle-down racism," and would usher in misogyny and bigotry that would "change the character" of America. It's an understatement to say that he wouldn't take Trump's calls, especially given that, knowing the Donald, they'd probably be expletive-laden for his public, personal, (and justified) insults about the nominee.

The other layer, of course, is the mention of the Romney's bizarre "binders" comment, which likely was a major reason he lost the election. What's worse: I feel a bizarre sense of nostalgia that Romney's ignorant gaffe about women was one of the biggest gaffes of the election, and the worst-case scenario would have been that he became president.

Clinton's "binders" joke cut deep, not only because it pokes fun at two consecutive Republican nominees, but also because it highlights the absurdity of male politicians in this era who can't explicitly name any women they'd want in their cabinets. It's almost as if they don't think women are smart or qualified enough for high offices or something.

More like this
10 Times Diana & Meghan Spoke Similarly On The Royal Family
By Sophie McEvoy
How The City Healed Five Years On From The Manchester Arena Attack
By Ella Glover
Michigan’s Governor Is “Going To Fight Like Hell” To Protect Abortion Access
By Andrea Zelinski
Here's Your Daily Horoscope For May 23, 2022
By Mecca Woods
Get Even More From Bustle — Sign Up For The Newsletter