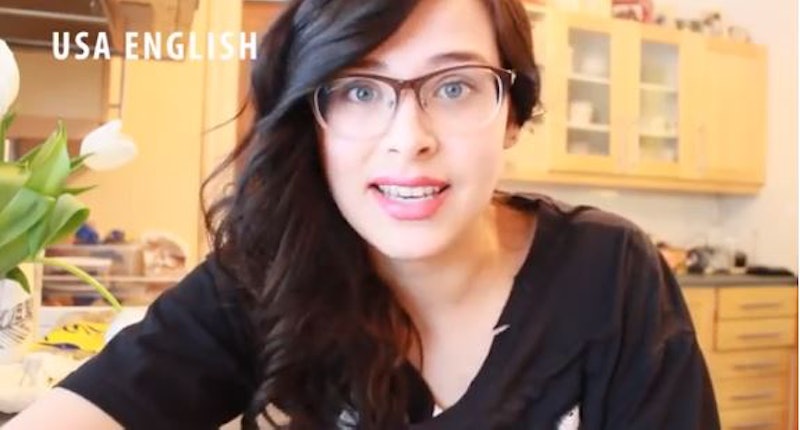 Sara posted a YouTube video about a week ago of her speaking strings of gibberish in the style of 15 different languages. Covering everything from Estonian to French and from both British and American English to “Pizza” (so named because, she wrote in a comment, “I knew it was so bad that if I had called it Italian I would’ve gotten my arselet crucified”), the video quickly went viral — and we can see why! She notes that the video is just her goofing around; obviously she’s not trying to actually speak the languages, but rather to show what these languages sound like to her as person who doesn’t speak them.

From what I remember from Psych 101, all humans are born with the ability to make all the phonemes, or linguistic units (sounds, basically) that exist in all of the languages in the world. We lose that ability pretty quickly, with our range of phonemes narrowing down only to what we hear most often. That’s why it’s so much harder to pick up a language later on in life: If you haven’t grown up speaking it, you’ve got to relearn how to make all the phonemes that make it up. Some people, of course, have a knack for languages — and some, like this gal, have a knack for sounds. The fact that she can mimic them all so flawlessly, whether or not she actually speaks the language, is pretty incredible, no?

The video got so much traction that she created a sequel, complete with a brief Q&A, a couple of redos, and a bunch of new ones including Australian English, Polish, and more: