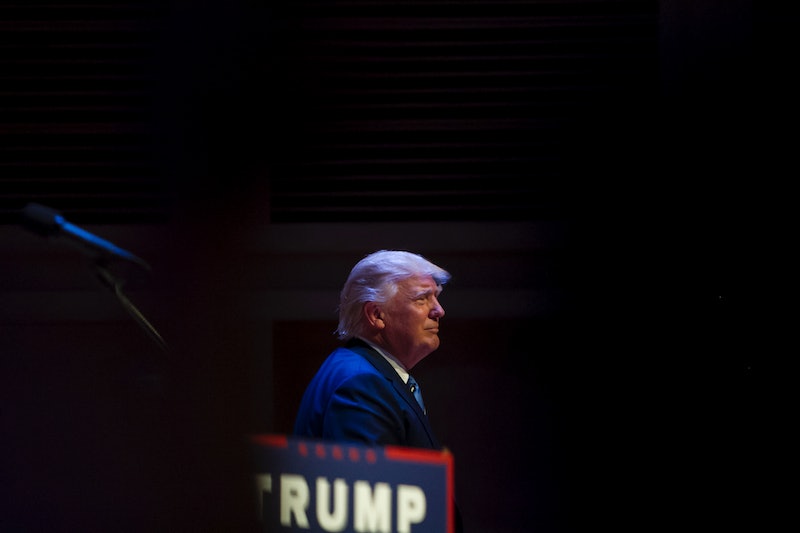 Nothing has prepared us for this late-stage edition of Donald Trump's candidacy. There now seems to be serious talk — long after the #NeverTrump movement was defeated at the Republican National Convention — of Trump not making it to Election Day, possibly self-imposed. Most of us would consider a presidential candidate dropping out of the race this close to the election as a failure… but what if Donald Trump dropping out could be his smartest move yet?

Before we can answer that question, though, we have to define what one would consider a “smart move,” and more importantly, by whom. Clearly, establishment GOP candidates worried about the dragging effect Trump will have on the ticket would like D-Trizzle to take a hike. Already, the IRL-Monty Burns-like Koch brothers — who originally promised to spend $900 million on the 2016 election — are pouring their scaled back funding into pivotal down-ticket races across the country. Getting Trump off the top of the ticket would liberate those Republicans in tight races from having to take a position on every bush league-level error Trump makes.

But maybe the deepest and most profound question to ask is: What does Donald want? If the simple answer is to be president, the simple retort is well he’s not doing a very good job of showing it. At several turns, he has actively worked against his own candidacy, the latest being his intractable stance against the family of slain U.S. soldier Humayun Khan. Despite having a number of opportunities to try and be politic towards Khan’s parents — which probably would require some form of apology for some of his statements — Trump has managed to dig himself in deeper.

There was a period late in the primaries where many predicted that Trump was pivoting from his radical stances meant to ignite the passions of his supporters to more moderated positions in order to build broad support for the general election. Except, it seems, a Trump can’t change his stripes: Our current Donald is just as reactionary and willing to say anything as ever.

So maybe he doesn’t actually want to be president. What, then?

The answer might be as simple as narcissism — Trump lives for the applause. Up until now, Trump has largely had control over his audiences, be it the reich-like crowds at his rallies or the less rowdy but still fervent supporters at the RNC. But we’re starting to near a point in the campaign where Trump could find himself in front of some largely un-friendly audiences: If nothing else, the three presidential debates (which Trump is already grumbling about) will put him at the front of the room where he might very well get booed. Dropping out before the debates allows him to control the narrative — not, perhaps, in the news cycle, but in his own mind, for sure — that the system was so rigged that even though he would have won a “fair” election, he didn’t stand a chance.

Besides, the biggest mistake any of us can make is to set the parameters of what Trump considers a success too narrowly: Most of us are thinking (in a blind panic) about Nov. 8. But Trump most likely has his sights set beyond that, and dropping out of the race before he could lose would open up other less demanding ego-massages than becoming president: Fox News commentator? Heading out on the lecture circuit? Or maybe go back to firing people on a ratings-boosted The Apprentice?

All of these options seem more realistic for Trump, given that he strikes me as someone who doesn’t do things he doesn’t feel like doing, and that being president often requires compromise and honoring obligation. Given the two equally intolerable choices of that or losing the election, getting out on his own terms (under the guise of a loaded deck) might be the best last move the Donald has.