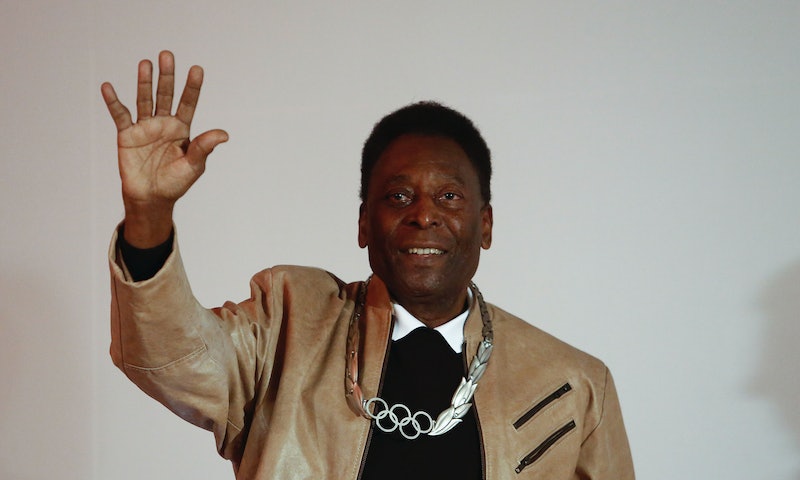 As it goes with every Olympic opening ceremony, someone special is selected to light the famous cauldron. The same can be said for the 2016 Summer Olympics, in which Brazilian soccer legend Pelé was chosen for the task. But If you were looking forward to seeing the 75-year-old soccer star as part of the games, there is some unfortunate news. Pelé will not be lighting the Rio torch. "#Pelé has written to #Rio2016 [organizing] committee saying he cannot light the Olympic flame at the opening ceremony due to physical frailty," Sky News Newsdesk tweeted Friday.

Pelé also released a statement (via the Associated Press) citing his poor health for the reason behind why he can't light the flame. "I'm not physically able to attend the opening of the Olympics," part of his statement reads. He also added that "only God is more important than my health. In my life, I've had fractures, surgeries, pain, hospital stays, victories and defeats. And I've always respected those who admire me." Pelé also let others know that this was his "own decision" and apologized for disappointing his fellow Brazilians. "As a Brazilian, I ask God to bless all who participate in this event," he said.

In April, it was first announced that Pelé was in the lead to be chosen to light the torch. After being asked by OlympicTalk (via NBC Sports) what it would mean to him if got to light the cauldron, Pelé said, "I am very, very happy if it happens. … It’s a gift from God if I have the health to be there. I wish I’d bring luck for Brazil."

Before Pelé announced he wouldn't be lighting the torch, he revealed he may not be able to do it due to his sponsors. "I have a contract that I am bound to fulfill," Pelé told Globo TV Tuesday (via Reuters). Reportedly, he had to consult the U.S. company who holds the rights to his brand name whether or not if he could accept the invite from the Olympics.

Even though he won't be lighting the flame, at least Pelé had the chance to carry the Olympic torch in 2004. At this time, it's unclear who will replace him as the torch lighter or if someone else has been selected.