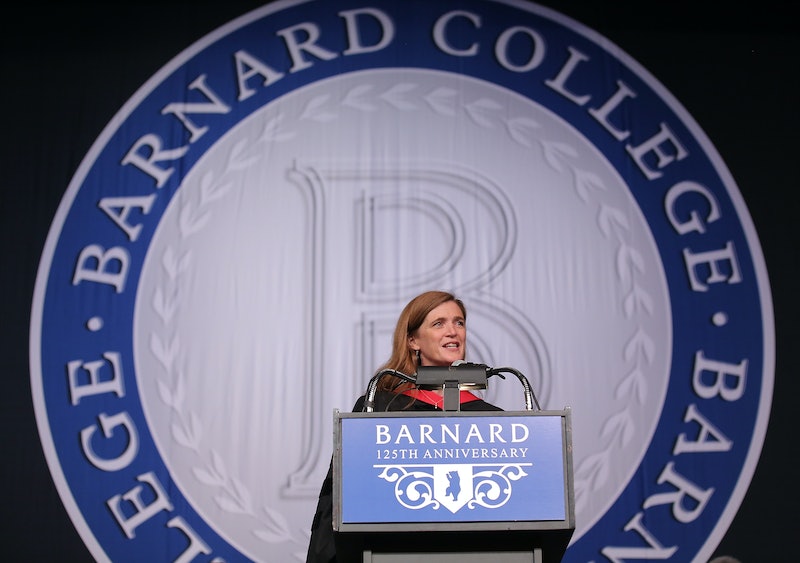 The most common criticism of women's colleges is that they cordon women off in an unrealistic environment, one in which the students have limited interactions with the men they will work alongside come graduation. Attendees of women's colleges, the critics say, are sheltered and idealistic. Putting aside, for the sake of argument, the fact that no college campus anywhere accurately reflects "real life" (when, in real life, do you attend Anything But Clothes mixers and have access to 24-hour dining halls in which your parents pay for your second helpings of frozen yogurt?), in my experience, this couldn't be further from the truth.

I attended Barnard College, the women's college affiliated with Columbia University, from 2006-2010. And during that time, I learned to trust my instincts, value my intelligence and refuse to be silenced. Before Sheryl Sandberg coined the term "lean in" in her 2010 TED Talk (and reiterated its importance in her commencement address to Barnard's class of 2011) my friends and fellow students were living it. I was surrounded not only by thousands of challenging, engaging, and inspiring peers, but also by powerful women leaders (65 percent of Barnard's faculty is female, compared with 38 percent of college faculty nationally). It was impossible not to feel empowered.

Thanks to the cross-registration system employed by Columbia University (in which students at Barnard College, Columbia College, and the Fu Foundation School of Engineering and Applied Science can enroll in classes at each of the others), I had plenty of classes with male students. Not to be reductive, but in my experience, these male students were quick to dominate class discussions. They often raised their hands before the professor had finished asking the question and bombarded students who held conflicting viewpoints with bombastic critiques — ones that, more often than not, were barely thought through.

Good thing, then, that my predominantly female and women-only seminars at Barnard gave me the opportunity to take a beat to gather my thoughts, as I so often needed to do. Such classes taught me to synthesize the information at hand, form my opinions, argue them coherently, and lead the discussion. By not fighting for attention with the boys while I was a growing, learning, tentative (self-doubting) neophyte, I learned the validity of my opinions and the power of my own voice. In being supported and empowered — by my professors, mentors, and peers — as a student, I was able to become a confident, outspoken, and thoughtful adult and working person.

And this community of empowerment extended from the classroom to the rest of the campus. With health, counseling, rape crisis and anti-violence, and research centers (Barnard has a fantastic Center for Research on Women, but this distinction is not Barnard-specific) catering and dedicated to women's needs, students are taught that their needs matter. Instead of being a source of embarrassment or an afterthought, women's health is viewed as central to providing for the well-being of the students.

But perhaps the most surprising advantage to attending a women's college comes when you leave the hallowed gates and are forced to explain, again and again and again (to aunts and uncles, neighbors, douchey guys you meet at bars who insist on calling your college an "all-girls school"), your decision to attend such an institution. By constantly defending my decision to attend a women's college — something I began doing almost as soon as I mailed in my acceptance — I was able to examine and understand my own motives. And I've found that self-reflection to be immeasurably helpful. In proclaiming the benefits of a women's college — and, more specifically, how attending one has helped me to define and achieve my own goals — I've learned to stand strong in my convictions and become a vocal advocate for women.

And, in a world where women must fight for their place at the table every day, that has made all the difference.