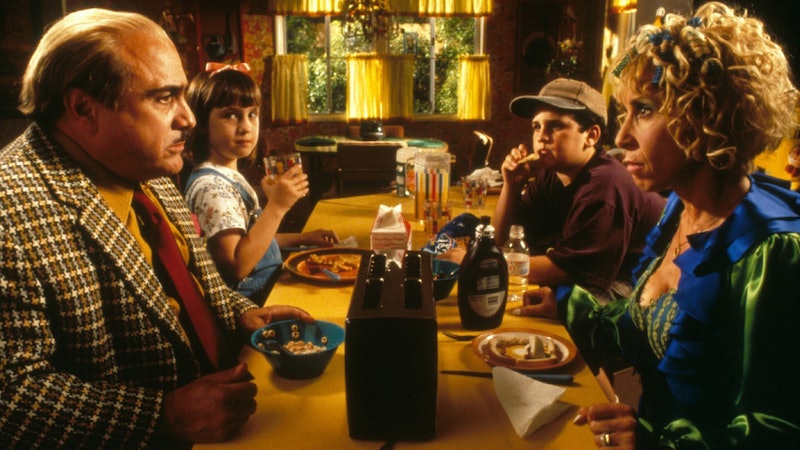 For anyone who adores reading, magic, and happy endings, the film adaptation of Roald Dahl's iconic children's novel Matilda was a truly special book. The whimsical story of a brilliant girl who develops telekinesis when she can't properly express her smarts gave hope to all of the underdogs out there, and reminded all of us that though it's frustrating for people not to understand us, someone out there in the world eventually will. I still get all of the good feels when Ms. Honey adopts Matilda and moves into her childhood home after the big, bad Principal gets the boot, because though every child deserves a good home, Matilda is one who has particularly earned it. Of course, because the film may ends on such an upbeat note, it's easy to forget that, in between its whimsy and loveliness, Matilda was one seriously dark, disturbing, and all-around messed up movie.

If you're trying to figure out just what I'm talking about, it's likely because you haven't seen Matilda since you were the titular character's age. Watch the movie now, and you'll realize that this film is actually tackling some seriously messed up subjects, and not even in subtle ways. Don't believe me? Here are just a few reasons why Matilda isn't quite as light viewing as you may have remembered.

Matilda's parents are literally the worst. They pay so little attention to her that Matilda has to tell them that she's actually six and a half — and not four, as they believe — because they totally forgot to send her to school. It's not merely that they're forgetful or absentminded, which would already be a reason to call Child Protective Services — they simply don't care. They don't even seem to bat an eye when they learn that Matilda, a girl who hasn't even hit the age of seven yet, has been walking alone to the library. Up until this point in my life, I never thought it was possible for parents not to care about their children, but Matilda was a nice little reminder that, uh, yeah, it is. That's just depressing.

2. Matilda's Dad Is A Criminal

This was a point that I totally didn't understand growing up, probably because I didn't know what a "lemon" was when it wasn't a fruit. In the film, Matilda's dad is a used car salesman who sells crap cars at a crazy price to make a buck. Matilda tells her father that he's a crook, and begs him to start selling "good cars" to people instead. When her father hears that, he stands in front of Matilda and says "I'm smart, you're dumb," further proving that Matilda has the worst parents to ever exist in a children's film. Oh, and her dad rips up her copy of Moby Dick, so that's not exactly ideal, either.

After evil Principal Trunchbull learns that a student had eaten her chocolate cake, she pulls out a punishment that can only be described as "problematic," in which she forces said student to devour an entire cake by himself. Though it's supposed to make him vom in front of all of his classmates, it actually makes him a bit of a schoolyard hero — but, uh, things could have gone very, very differently.

4. The Trunchbull's Chokey Is The Stuff Of Nightmares

The "Chokey" is a small wooden closet with actual spikes sticking out of it, and it's the torture chamber equivalent of being sent to the Principal's office in this world. How anyone would be OK with sending their children to school when there's an iron maiden-lite used as routine punishment, I'll never understand — unless everyone's parents were like Matilda's, of course.

5. When We Learn About Ms. Honey's Dark Past

So, not only is Matilda neglected at home, but her absolutely wonderful teacher, Ms. Honey, was horribly abused by her aunt... who just happens to be the Trunchbull. Oh, and in addition to being the evil human being we know her as to Ms. Honey, there's a very real chance that the Trunchbull straight-up murdered her father, who allegedly committed suicide. Yikes.

6. When Matilda Pretends To Be Ms. Honey's Dead Dad

Ah, yes. Thanks to Matilda's telekinetic powers, Matilda is able to trick the Trunchbull into giving Ms. Honey her house back — but not before the movie straight-up confirms that Trunchbull is the murderer that she's implied to be. It's a heroic ending for Matilda and Ms. Honey, but the message that Matilda leaves on the chalkboard is one that no child should ever read, let alone write:

Matilda may have ended happy, but boy, was there some serious darkness along the way.