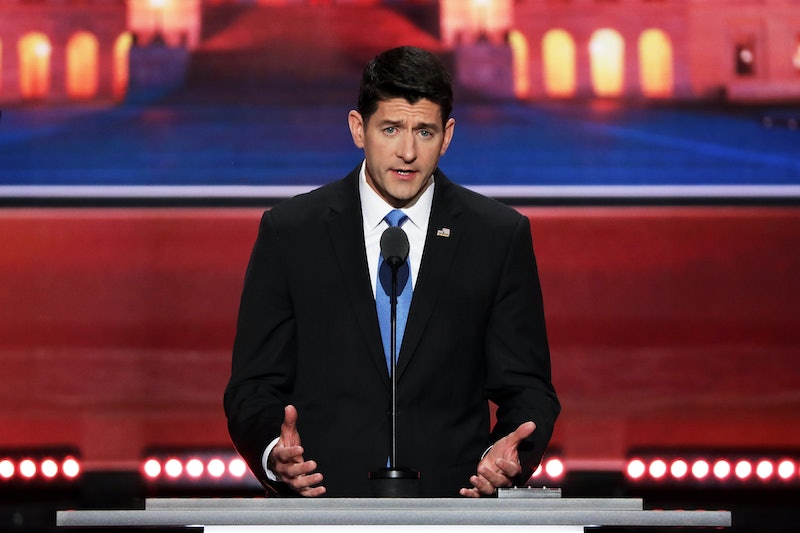 We are in strange times, friends. Democrats are the party of optimism, and the Republican nominee is spending his days casting aspersions about Gold Star parents and heckling babies. GOP leaders are scrambling. There are reports that some top Republicans are exploring how Donald Trump might be replaced. But that’s only half the question; the other half is, who would be up for the job? One of the more popular potential dark horse candidates is the speaker of the House. Assuming Trump vacated the race, could Paul Ryan replace Trump on the Republican ticket?

There are two levels at which we have to ask this question: the first is purely administrative. At the moment, Ryan’s name isn’t on the ballot for president in any of the 50 states, and in some states, the deadline has long since passed to add names. Specifically, 26 states' deadlines have already lapsed, including that of Texas, the largest single GOP-leaning state. Write-in candidates are still allowed in most states, but even some states, like Texas, require write-in candidates to register in advance.

But assuming that he could overcome the administrative hurdles, would Ryan even want to come to his party’s rescue? First to consider are all the reasons why Ryan, who was Mitt Romney’s running mate in 2012, didn’t want to run for president in the 2016 GOP primary. He’s the father of young children and has a pretty influential position already as speaker of the House (third in line to the presidency). Short of some really stunning surprises, the House will remain firmly in GOP hands (even with a predicted 18-seat gain by the Democrats by ElectionProjection.com). If that happens, Ryan will stay its leader.

Moreover, whomever replaces Trump doesn’t exactly have great odds of success. Although the situation is unprecedented, common sense tells us that if Ryan were to replace Trump atop the Republican ticket, it’s not like all of Trump’s supporters would obediently switch over to support Ryan. Indeed, we saw how unwieldy populist support can be at the Democratic National Convention, when Bernie Sanders threw his support behind Hillary Clinton, and yet couldn’t quiet his more radical followers in Philadelphia. Even if Trump exited the race, it’s seems unlikely that his supporters would flock to an establishment candidate*, like Ryan.

So, could Ryan replace Trump on the GOP ticket? It’s possible, but it’s a long shot. Of course, what in the 2016 race hasn’t been a long shot?

*It’s worth noting that in 2012, Ryan was actually considered the outsider by many, which just goes to show how much Trump has shifted the national conversation.