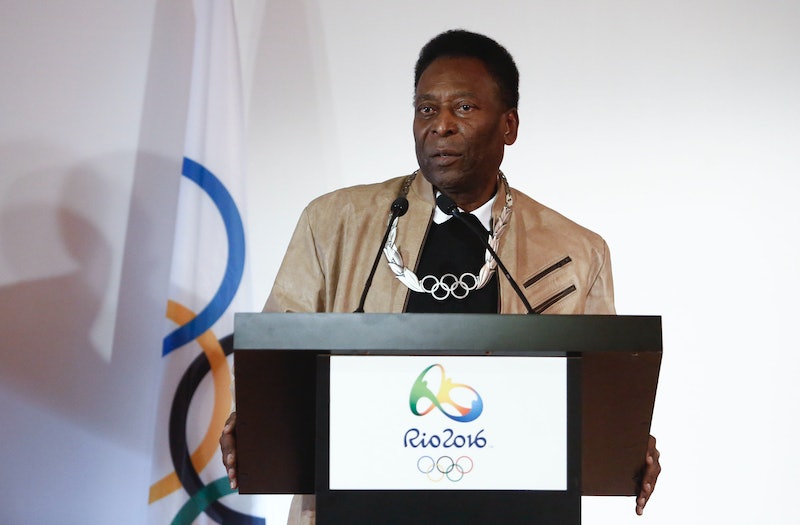 After years of battling with various illnesses, such as kidney stones and complications with urinary tract infections, soccer legend Pele is sick again. This time, the 75-year-old soccer star has decided the illness is too much to participate in the Rio Olympics opening ceremony, Associated Press reported.

Pele, whose real name is Edson Arantes do Nascimento, is a retired Brazilian soccer player. He won three World Cup tournaments for his home country in 1958, 1962, and 1970, and is arguably one of the most recognized faces of soccer. It was an honor that Pele was selected to light the Olympic cauldron at the 2016 Games, as he is from Brazil and the country will host this year's event. However, Pele reportedly had to check with his sponsors to determine if he would be legally allowed to carry out those duties, as he had a contract that he was "bound to fill," according to Reuters. He was required to check with the U.S. company that reportedly holds and owns the rights to his brand name to confirm that they would allow him to participate in lighting the Olympic cauldron, Reuters reported.

Despite concerns of sponsorship issues, Pele has since become too ill to participate in the opening ceremony on Aug. 5.

"Only God is more important than my health," Pele wrote in an official statement, according to AP. "In my life I've had fractures, surgeries, pain, hospital stays, victories and defeats. And I've always respected those who admire me." Although there were issues with the sponsor rules and whether or not Pele could travel to Rio before the day of the opening ceremony, he also indicated in the statement that it was his own decision to pull out of the ceremony.

It is unclear what exactly Pele is sick with; in November 2014, he was in the intensive care unit of a hospital in São Paulo, Brazil, where he was reportedly being treated for a urinary tract infection and kidney stones, according to CNN.

His statement on the status of his health was relatively brief, so it's difficult to deduce what the health issue could be. However, it seems that it was some sort of unanticipated illness, as he only made the announcement on the day of the opening ceremony.

Pele shared a photo to his personal Twitter with what looks like the Olympic cauldron and the hashtag #Rio2016. Clearly he was excited and honored to participate in this opening ceremony, which makes his illness all the more difficult for him (and his fans) to deal with.