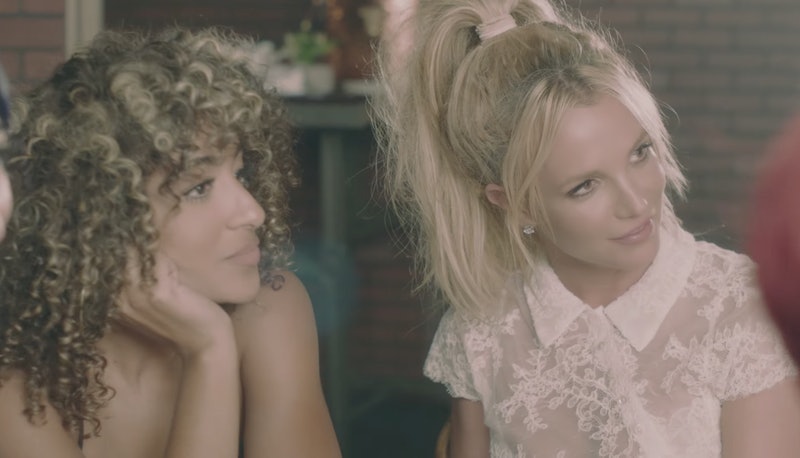 The Pop Queen has done it again. When Britney Spears' "Make Me" music video hit the internet, everyone stopped and took notice, as people tend to do whenever Spears does anything. The video opened on a scene that's familiar even to us normal people: the pop singer is sitting surrounded by her girl friends when a cute guy swings by. After a conversation about plans for the night, the guy is rightfully terrified that Spears and her ladies seem to have cat-that-got-the-canary expressions on their faces when he confirms he's in for whatever. However, those aren't just Spears' real friends in the "Make Me" video. I mean, they are, but they aren't. The women in the video are Spears' dancers from her Piece of Me Vegas residency. They count as her friends, too, but, you know, she also pays them.

Many of the faces of the women in the opening scene will be immediately recognizable to anyone who spends even a short amount of time on the pop star's Instagram. She's taken group pictures with these ladies before, with touching captions that make it clear it's not exactly a hardship for Spears to spend any length of time with them. Of course, that's no surprise. This is the same woman that took them all out for an Italian dinner, because Spears is clearly the best boss ever. However, the platonic chemistry between all these ladies can't be faked.

Spears promised us a sound rife with female empowerment, and it's nice to see her music video reflecting that. These dancers may be professionals rather than purely Spears' friends, but the way they are at ease around the singer, and the way they all absolutely seem to be acting like typical women having fun with each other on a nice day, is relatable even to all of us who have never had the pleasure of spending any length of time with Britney Spears.

The "Make Me" video as a whole is one of those that invite you to get up, dance, and realize that you are the master of your own destiny and you don't really need a man to have a good time. The camaraderie of these women builds into that message, and sends the video off to a strong start.

Maybe if I practice for, you know, literal years, I can one day dance for Britney Spears both on stage at a concert and in a music video as well. Until then, I guess I'll just watch "Make Me" on repeat like everyone else.