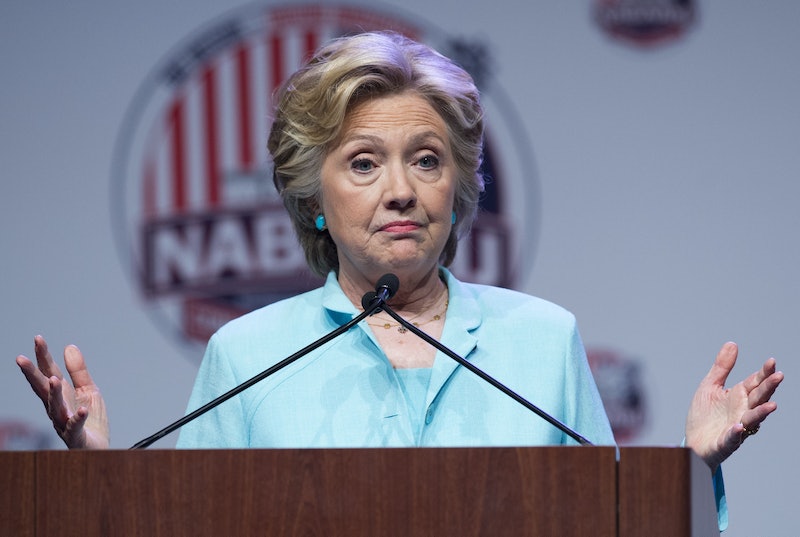 After being in the public spotlight for decades as an outspoken woman, it's no surprise that this video of Hillary Clinton answering sexist questions exists. In it, you can watch Clinton field outrageous sexist comments and questions for nearly 40 years. None of them centered around legitimate issues. Instead, they doled out gendered criticisms of Clinton and made her seem like an anomaly for being a woman interested in politics and policy.

In 1996, Barbara Walters asked Clinton whether or not she thought the public was ready for "a first lady who has strong opinions and an agenda." And that wasn't the only time Clinton was asked that type of question; another interviewer asked her, "Can a first lady be both popular and opinionated?" Apparently not.

After Clinton's recent email scandal, the American people have understandably become more distrusting of her. However, since the late 1970s Clinton has received criticisms that she's not trustworthy and she lacks credibility. These were clearly gendered attacks, though, as they were often supported by tying her lack of credibility to the way she carried herself or the way she spoke.

Although the questions are downright comical at some points (because they're so ridiculous), the entire video is difficult to watch when you stop to consider the explicit sexism that Clinton has had to deal with for nearly four decades.

What's most sad is realizing how many men (and women) automatically assumed that Clinton would be interested in certain things based on her gender. One reporter stumbled through a statement that I'd like to think he knew had no place in the interview: "So I'm getting the impressing that you're really not all that interested in state dinners, and teas, and garden parties." Sure, that was in 1979, so I would've excused the blatant sexism if every other interviewer in the video didn't continue to make similarly sexist comments until 2016.

Other terrible questions asked why she thought people viewed her as a threatening person and why many made comparisons between her and Lady Macbeth. "What is it about you that pushes people's hot buttons?" another reported asked, and the answer was clearly her gender.

The video speaks for itself and it's a disappointing reminder of the struggle for gender equality throughout the years. Most unfortunately, though, is that it features clips of gendered criticisms from just this year — a year in which Clinton made history by becoming the first woman presidential nominee, yet people are still "not ready" for a woman leader.