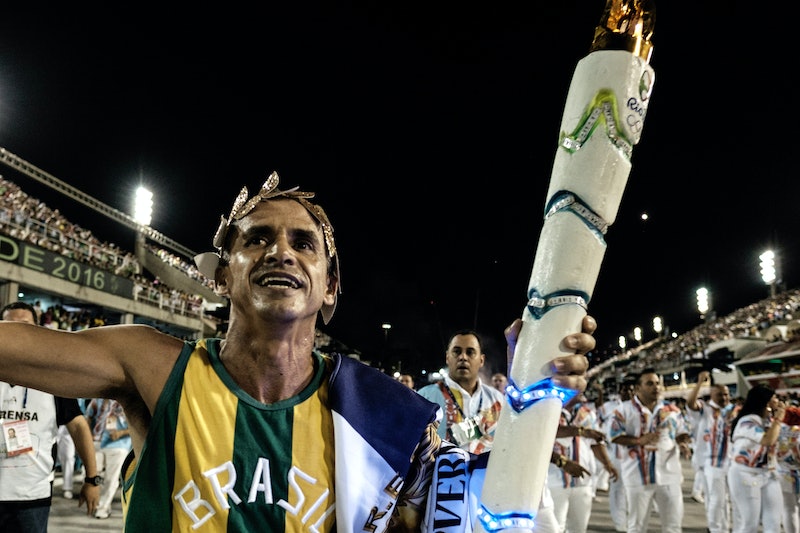 On Friday night, the Olympic cauldron ignited in flames, signaling the start of the 2016 games in Rio de Janeiro, Brazil. The opening ceremony was held at the historic Maracanã Stadium. Since April, the Olympic torch has traveled upwards of 22,000 miles and has been carried by thousands of people to make its way to the cauldron finally on Aug. 5. The identity of the individual who takes the torch to the cauldron remained a secret until the very last minute on Friday, but when the time came, Brazilian Marathoner Vanderlei Cordeiro De Lima lit the Olympic cauldron.

Because the individual who ultimately lights the torch is usually a well-known and adored athlete from the host country, there were rumors ahead of the opening ceremony that Pele — a former professional Brazilian soccer player and three-time World Cup winner — would be the one to light the symbolic cauldron. According to BBC, Pele was asked earlier in the week to take up the honor of kicking off the 2016 Games. However, it was announced on Friday that he was unable to attend the ceremony due to health reasons. "I've always tried not to disappoint my family and the Brazilian people. At this point, I'm not physically able to attend the opening of the Olympics," Pele wrote in a statement.

Even though Pele wasn't able to make it to Rio for the opening ceremony, viewers were both excited and proud to see Cordeiro de Lima light the Olympic cauldron, which signaled that the 2016 games had officially begun.

Cordeiro de Lima is a former long-distance runner who received the bronze medal at the 2004 Olympics in Athens. He was expected to win gold as he was in the lead during the event until he was attacked by a spectator. Even so, he continued the race and placed third and was awarded the Pierre de Coubertin medal for sportsmanship for continuing and finishing the race and accepting the third place prize with grace. Meb Keflezighi, a long-distance runner and silver medalist in 2004 who is representing Team USA in Rio told Sports Illustrated, "It is so fitting that my fellow 2004 Olympic marathon medalist Vanderlei de Lima is chosen for this honor. He embodies the spirits of Brazil and the Olympics."

And what an honor for the Brazilian athlete, indeed, given the significant history behind the Olympic torch and its journey between host countries. According to the official Olympics website, "In the context of the modern Games, the Olympic flame represents the positive values that Man has always associated with fire. ... The choice of Olympia as a departure point emphasizes the link between the Ancient and Modern Games and underlines the profound connection between these two events." This year's torch passed through more than 300 cities and towns, and five regions of Brazil over the course of 95 days before making its way to its final destination at the Maracanã Stadium.

Friday night marks the start of the 2016 Olympics, which will continue through Aug. 21.