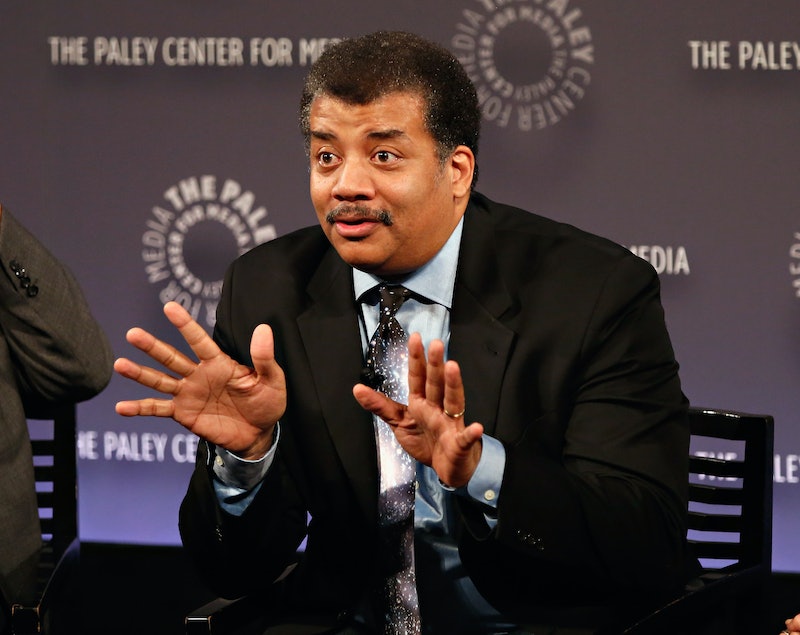 I must admit, before watching Neil DeGrasse Tyson's reboot of Cosmos Sunday night, I had only vaguely heard of the 1980 original. I knew Carl Sagan hosted a show about space, and I thought I had heard that there was a bizarre spaceship involved, so when I turned on Sunday night's one-hour special, I had murky expectations. And even though I didn't agree with everything in Cosmos, I must say, I had a thoroughly good time watching it.

Let's start with the great things. The animation is spectacular. Even when glancing over string theory or recreating the first animal to walk on land, it looks as flawless as a big-city planetarium show. When commercials inevitably barged into the seamless space vistas during the first broadcast, it was jarring, if only because they weren't as well animated as the program itself. Even the notorious "imagination spaceship" looks amazing, although adherents of the #cosmos stream will remember some less-than-complimentary comparisons between DeGrasse Tyson's spaceship and a sex toy.

Cosmos also knows its audience. Although it disseminates basic scientific information about the universe, references to Pluto and the "invention of sex" are clearly geared for an older crowd. And Neil DeGrasse Tyson's tribute to Carl Sagan at the end was both touching and necessary to bridge the gap for viewers who knew more about the original Cosmos. I will never have a bad thing to say about Neil DeGrasse Tyson, but his adorable thank you to Sagan made him somehow more likeable...which I hadn't thought was possible.

Although Neil was great and the space animations looked more gorgeous than Chris Hemsworth in a tux, I did have some problems with the scientific history part of Cosmos. Slate and Vulture have gone back and forth on the relationship between church and science in Cosmos, but I think their squabbling misses a grander problem with the story of scientific discovery. Although the segment on Giordano Bruno does raise some pertinent questions about Christianity's fraught relationship to science, it also promotes a completely Eurocentric view of astronomy. Yes, they mention other civilizations during the "look how we've grown from cave men until now" segment, but they completely leave out any non-European theorists such as Nilakanthan Somayaji or any of the Islamic astronomers Copernicus copied.

I'm not saying that a view of history that compliments all American history textbooks is particularly shocking or disgusting, but I had hoped that Cosmos could take a wider view. After all, the original Cosmos was officially titled Cosmos: A Personal Voyage, while this version bears the name Cosmos: A Spacetime Odyssey. But even with this historical flaw, Cosmos was a joy to watch, and I'll be hoping for a more inclusive history next week. And if Neil DeGrasse Tyson is half as magical as he seems, he'll deliver.