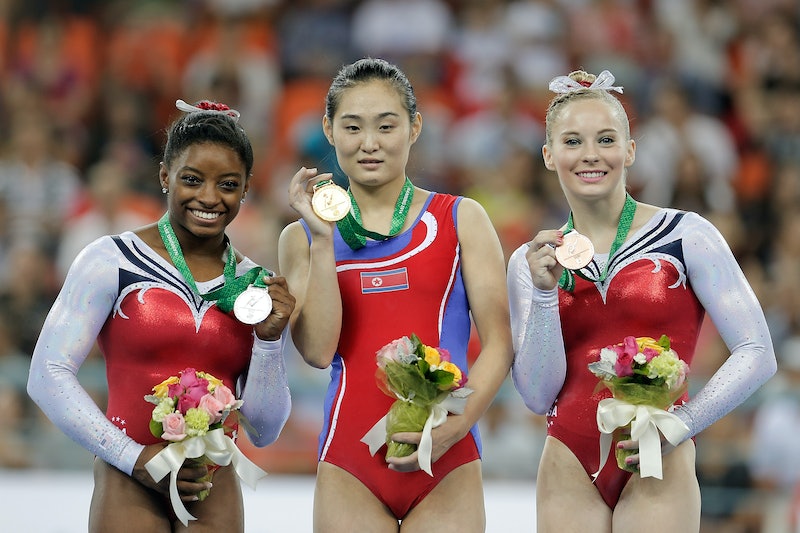 As an American, there's very little more patriotic than rooting for Team USA at the Olympics, particularly in sports which the United States typically dominates. This year's women's gymnastics delegation is expected to slay in Rio, and current world champion Simone Biles is tipped to win five gold medals, an unprecedented feat in the sport. However, one gymnast may prevent Biles from reaching her goal: North Korean Olympic gymnast Hong Un-Jong. The Olympic veteran could take the gold in vault this year with a powerful new move that no female gymnast has ever done in competition, so Team USA has a big competitor to watch out for in Rio.

Since arriving on the international gymnastics scene, Hong has proven herself to be a powerhouse in the sport, particularly on vault. She earned the gold medal on vault at the 2008 Beijing Olympics, becoming the first North Korean female gymnast ever to earn an gold medal at the Olympics. In 2014, she beat current Olympic favorite Simone Biles at the World Championship to become the number one vaulter in the world.

But Hong's career has not been without controversy. The North Korean gymnastics team was sentenced to a two year ban from international competition between 2010 and 2012. The International Gymnastics Federation alleged that Hong Su-Jong, Un-Jong's sister, falsified her birth date and participated in international competitions before she was eligible to do so. As such, Hong Un-Jong unfortunately missed out on the chance to compete in the London Olympics, making Rio her first return to the Olympic stage since 2008.

Hong also suffered a shoulder injury that kept her from competing on the uneven bars in the Asian Games in 2014, although the injury doesn't seem to have caused any reoccurring problems. Despite the difficulties throughout her career, she's one of the most highly anticipated competitors in gymnastics at the Rio Olympics.

Hong will have the chance, and a good one at that, next week to reclaim the title of world's best vaulter from Russian gymnast Maria Paseka, the 2015 world vault champ. She's expected to debut a new move, a triple-twisting Yurchenko, which involves three full twists off the vaulting table. According to NBC, the vault has never been tried by a female gymnast in competition. If Hong pulls off the move in the finals, she'll not only likely win the gold medal, but also set a new precedent for vaulting on the international stage.

Hong should be one of the most exciting and dynamic gymnasts to watch at this year's Olympics, so be sure to tune in, especially when she competes in her main event, the vault. Upping the level of competition is always an exciting prospect, so even if you're rooting for Team USA, you can still root for Hong, too.