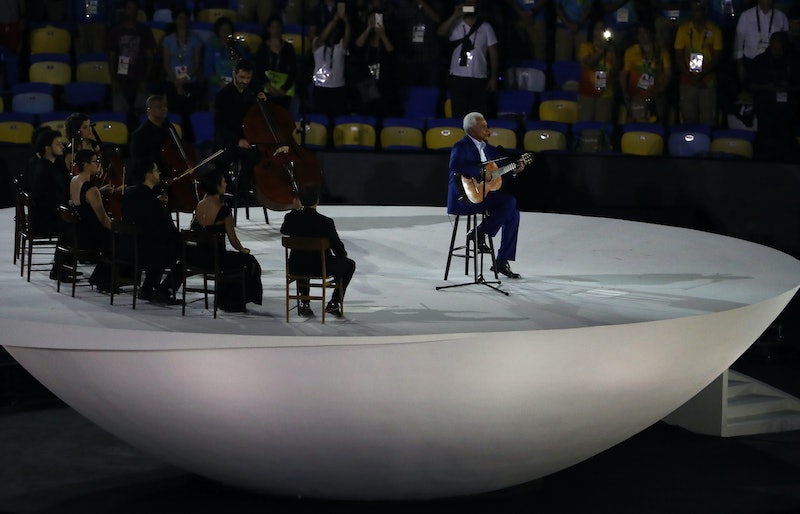 The 2016 Olympics opening ceremony has kicked off from Rio de Janeiro, Brazil, and one of the first orders of business is the singing of Brazil's national anthem. The country's anthem is a bit more chill-sounding than that of the U.S. (OK, ours isn't chill-sounding at all), so if you are used to the "Star-Spangled Banner," you might not have been sure what you were listening to. The singer of the Brazil's national anthem at the Olympics was Paulinho da Viola, a Grammy Award-winning Brazilian singer/songwriter and multi-instrumentalist, who did a great job kicking off the show with his calming vocals.

If you speak even a little bit of Portuguese, you already know that Paulinho da Viola isn't his real name. "Paulinho da Viola" means Paulie Guitar in English, as the Rio 2016 website points out. His given name is Paulo César Batista de Faria.

While da Viola experimented with music for much of his life and came from a musical family, his career really took off in the 1970s when, as Rio 2016 reports, he began putting out around an album a year. In 1996, he released Bebadosamba, which, according to Spotify, was his first gold record, with 100,000 copies sold. As for genre, da Viola is primarily known for Samba music.

While da Viola is well known in Brazil, if you're an international viewer, this may have been your first encounter with him, which is a great thing. After all, learning about other cultures is what the Olympics is all about.

More like this
Jake Daniels Just Became The UK’s First Active Football Player To Come Out As Gay Since 1990
By Sam Ramsden
What Is Jeanie Buss' Net Worth? The Lakers President Is Uber Rich
By Hugh McIntyre
Taylor Swift Knew Hayley Kiyoko & Becca Tilley Were Dating 4 Years Ago
By Grace Wehniainen
Mick Jagger Calls Harry Styles A "Superficial Resemblance" To His Younger Self
By Jake Viswanath
Get Even More From Bustle — Sign Up For The Newsletter