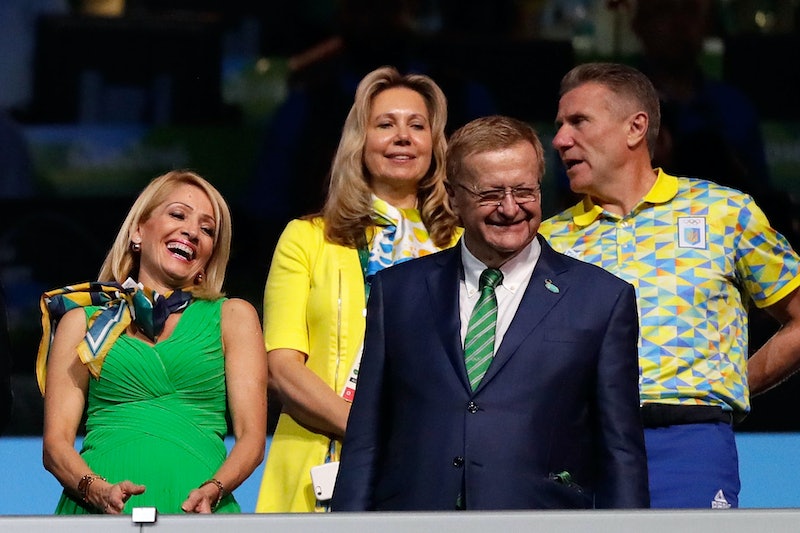 There's certainly an undeniable amount of pomp and circumstance involved in every Olympic opening ceremony. Along with the fireworks, music, and dancing, there's traditionally a series of formal introductions that are made before the athletes are introduced in the Parade of Nations. This year, however, one person was conspicuously passed over in a serious break from protocol. Brazil's interim president wasn't introduced during the opening ceremony.

Traditionally, the leader of the host nation is formally presented to the crowd ahead of a performance of its national anthem as part of the Olympics opening ceremony program, but while International Olympic Committee President Thomas Bach was introduced, Michel Temer, who serves as Brazil's interim president following the ousting of Dilma Rousseff, was not. For anyone familiar with the must-have components that make up the Olympic's kick-off event (or anyone with access to the event's schedule), the last-minute program change was obvious, although not altogether shocking.

Temer may have asked organizers to forgo his planned introduction at the last minute in an effort to keep the spotlight off Brazil's political turmoil. Reports that opposition members and activists were planning to boo Temer as he was introduced during the opening ceremony had surfaced in the days leading up to the start of the Olympic Games. Initially, Temer reportedly told local media that it would take more than a jeering crowd to deter him from fulfilling his duty as leader of the Olympic host nation. "As Nelson Rodrigues said, at the Maracanã they even boo the moment of silence," Temer said, according to the Los Angeles Times. "I have to carry out my institutional duty," he added.

A little more than two months before the Olympics were set to kick off in Rio de Janeiro, Temer stepped in as Brazil's president following what some have called a nonmilitary congressional "coup" that pushed Rousseff out of power to await an impeachment trial. However, Brazil's interim president has struggled to shore up support amid criticism of both the financial spending behind the Olympics and his political leadership. Some Brazilians have called for corruption charges to be levied against Temer, who served as Rousseff's vice president.

If the upbeat dance music, colorful costumes, and vibrant lights of Rio's opening ceremony didn't make it clear enough that Olympic organizers are looking to change the doom and gloom narrative surrounding the games, their decision to skip over Temer's official introduction for fear of spurring a few jeers certainly does.