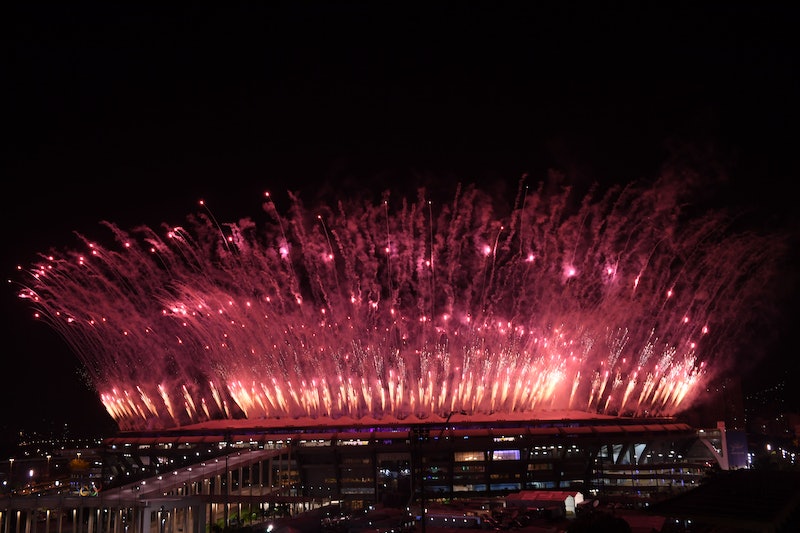 If you were one of the many who tuned into the 2016 Olympics opening ceremony Friday evening on NBC, good news: You weren't even close to alone. According to The Hollywood Reporter, just how many people watched the Rio opening ceremony telecast, which ran from 7:30 p.m. EST to 12:30 a.m. EST, is astonishing. In fact, it drew in a massive 30 million viewers — still less than the 2012 London Olympics opening ceremony, which drew in 40.7 million, but hey, it's still respectable. However, just because those two numbers are high and impressive and stuff from a ratings standpoint, don't think that makes the opening ceremony the most-watched event of the year or anything. I mean, it's definitely up there, but it's not top. No, that honor would go to the Super Bowl 50, which amassed 111.9 million viewers during its telecast in Feb. 2016, according to Nielsen.com. That is a lot of people, and even more chips and guac consumed.

So, why more people tuning into the Super Bowl than the Olympics opening ceremony? Well, it could in part have to do with the time slot: Whereas the Super Bowl 50 aired on a Sunday night, which allowed many people to plan their days around it, the Rio opening ceremony aired on a Friday night. Not only is that prime going-out time for many younger viewers, but it's also difficult to plan something when you've got work all day. This could have resulted in less parties, aka, less chips and guac.

It could also have to do with online streaming numbers not being incorporated into the Rip opening ceremony's ratings. While the Super Bowl is classically watched at a party with a group of friends on a real television set, the opening ceremony was available to stream online at NBCOlympics.com. People could either stream it while it aired live on NBC, or they could even watch it later if they wanted to. Those numbers aren't factored into the opening ceremony ratings, and thus could deflate the number.

Whatever the case, 30 million viewers is still a massive number, and something to be proud of. Let the (Olympics) games begin!