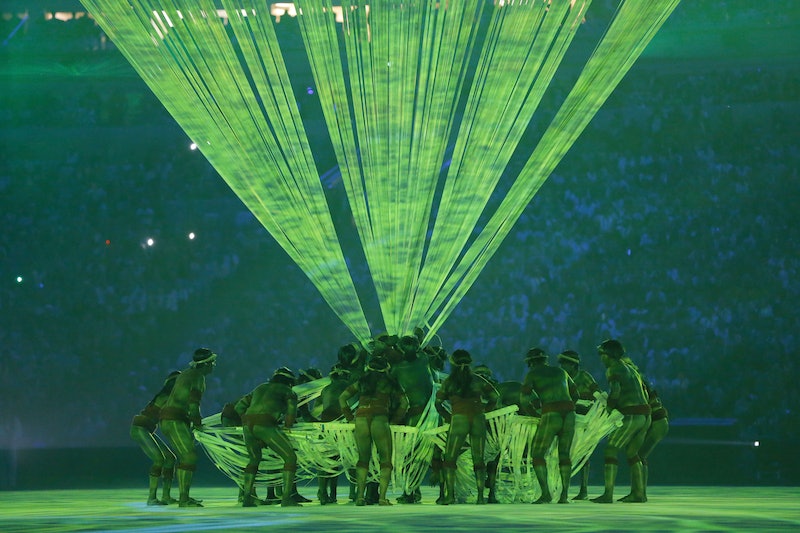 Climate change took a central role in the Rio Olympics Opening ceremony, with an awesome video (narrated by the incredible Dame Judi Dench) that showed how global warming is affecting the world's population. Although climate change can often feel like a dangerous but inaccessible concept, this one image shows how climate change really affects the world, and hits home the point that the Olympics was trying to make.

The picture shows how carbon dioxide moves among the atmosphere throughout a typical year, and it's a pretty disturbing image. The red swirls on the graph show dangerous levels of carbon dioxide, which covers the majority of the Northern Hemisphere for most of the video. The video reinforces the point that the Olympics was putting forth, that climate change should be one issue that everyone can commit to solving because it affects people everywhere.

Brazil has been leading the charge for climate change among developing nations, lending a credence to the message of commitment to environmentalism that played a significant role in the ceremony. In 2015, Brazil committed to cutting 37 percent of its carbon emissions by the year 2025. Although the preparations for that goal have been somewhat delayed by Brazil's recent political turmoil, the country still leads the developing world in climate change efforts, and it's proof that developing countries can sustainably create new economies.

However, as the picture shows, carbon dioxide emissions really aren't a problem that affect all nations equally — the United States and China are visibly the two most affected countries and the Northern Hemisphere is much more heavily covered in emissions. This visually confirms the statistics for global emissions, which show that the United States and China are the worst offenders. The message at the Opening Ceremony may have shown how developing countries could improve, but it also shows that the countries who emit the most CO2 have to get it together, too.

The video proves that the entire world is affected by climate change, and the more that fact is reinforced through high-profile events like the Olympics, the more likely there will be real movement on the issue on an international scale. People all over the world are suffering from the health effects of global warming, and if nothing is fixed before long, the world climate could be beyond help. Climate change truly is a global problem that needs a global solution, and its inclusion at the opening ceremony proves that progress is actually happening.