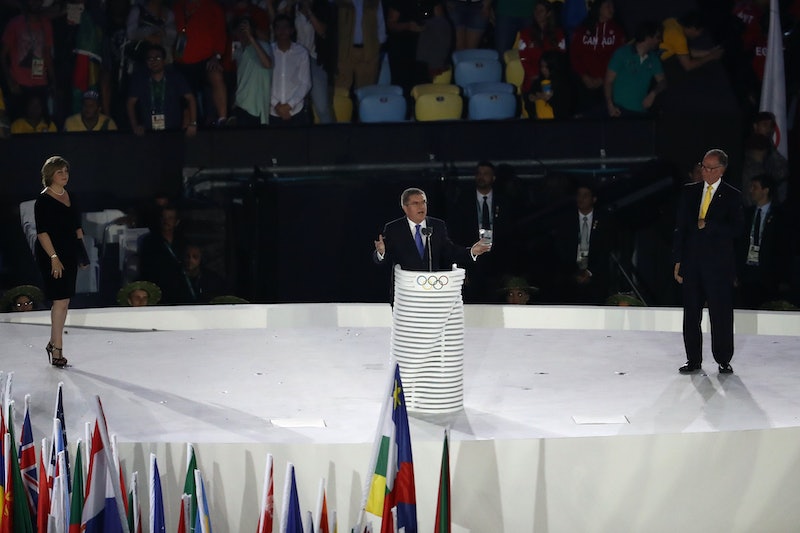 On Friday night, 10,000 athletes representing countries around the world came together at the 2016 Olympics opening ceremony in Rio to kick off the start of this year's games. There were lights, fireworks, music, dancing, and performances that painted a story of Rio's culture and history. And as people from around the world came together in celebration during the Parade of Nations, President of the International Olympic Committee Thomas Bach made a speech with an important message about unity that the world needs to hear.

This year, the first-ever refugee team will compete in the Olympic games, making an important statement about their individual struggles, and bringing much-needed attention to their stories and the crisis facing millions of displaced people around the world. The team — which is made up of 10 athletes who come from the Democratic Republic of Congo, South Sudan, Syria, and Ethiopia— is officially called the Refugee Olympic Team, and they walked out together under the Olympic flag.

That the Refugee Olympic Team is competing this year is an important symbol of unity and is one step toward breaking down some of the barriers that separate and divide people around the world.

Here's what Bach had to say about the importance of unity, finding our shared humanity, and showing love and acceptance of one another:

Bach's message to the world homed in on the importance of living peacefully together in a "world of crisis, mistrust, and uncertainty." Using the example of the 10,000 athletes from around the world who came together in one shared community, Bach expressed that, "In this Olympic world, we see that the values of our shared humanity are stronger than the forces which want to divide us."

There are currently 21.3 million refugees across the world who have been forced to flee their homes and their countries for protection and safety. And despite the divisive and dangerous rhetoric of politicians in many host countries who provoke a fear of these individuals, in truth, they are fleeing violence in order to survive. Bach's strong words of acceptance were important for all of us to hear.

He said, "We welcome the refugee Olympic team. Dear refugee athletes, you are sharing a message of hope to all of the … refugees around the world. You had to flee from your homes because of violence, hunger, or just because you were different. ... In this Olympic world … we welcome you as an enrichment to our unity and diversity."

While we must remember that our common humanity unites us all as individuals, we must also — now more than ever — value and accept difference.