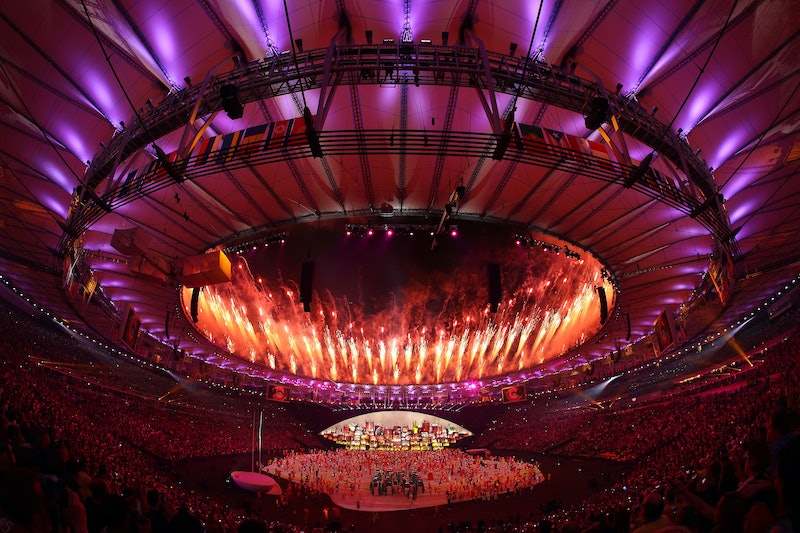 The Rio opening ceremony captured the world's attention on Friday night with a beautiful and elegant event that built on a great tradition of celebrations to kick off the Olympics. Yet one important thing was conspicuously missing until late in the event — the Olympic rings. When they were finally introduced, the ceremony made good on the environmentalism theme by introducing the Olympic rings at the opening ceremony with its shiny seed people turning into giant green trees that formed the rings.

The internet certainly had fun with the seeds, which were the butt of some pretty great jokes. However, funny as the costumes were, the message behind the interpretive dance was important in the context of this Olympics. Climate change took center stage throughout the ceremony, with a video narrated by Dame Judi Dench and a focus on Brazil's natural treasures, as well as the trees. The Amazon rainforest is one of the most important remaining natural resources in the world, and one that needs to be actively protected from further exploitation. The Olympic rings are a symbol of global unity, and using them to promote a message of environmental protection is a powerful message to the international community.

The theme of environmentalism will carry through the rest of the Games as well. Large scale events like the Olympics can often have a massive carbon footprint, but the Rio organizing committee has made a concerted effort to reduce emissions throughout the Games.

The Olympics' official energy partner Dow Chemical is offsetting 2 million tons of carbon dioxide and the state government of Rio de Janeiro is offsetting 1.6 million tons, resulting a 1 percent decrease in the total emissions from the 2012 Olympics. Brazil has set an example for developing countries on how to be a leader in reducing emissions, and the Games should be a great opportunity to spread that message.

After the focus on climate change in this Olympics, the Games may imbibe this commitment to sustainability and make the beloved event a tangible force for change. The Olympics is not only a time to spread an international message of unity, but also an opportunity to set an example for the rest of the world. Since sustainability is a truly global issue, it's fitting for this global event to tackle problems and find solutions that help people in every nation.