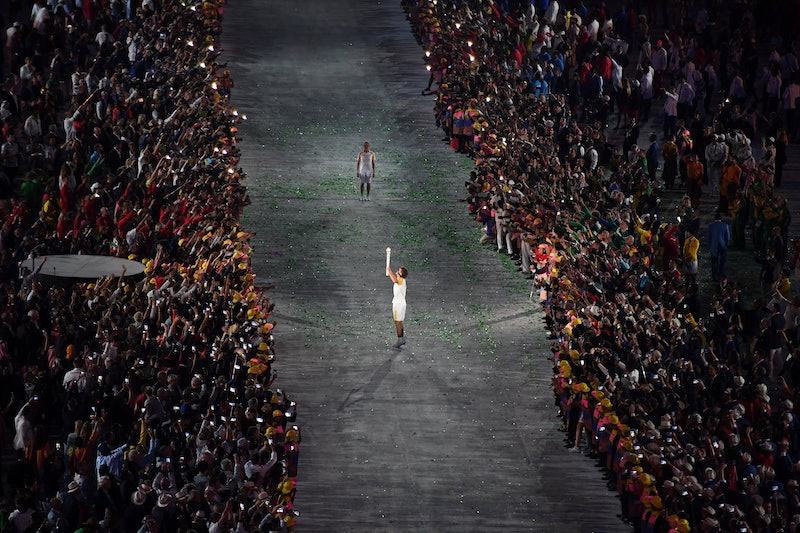 Well, this is definitely the most surprising part of the night. During the 2016 Rio Olympics opening ceremony, some Twitter users noticed that certain photos of the arena look like a vagina. Yeah, you heard that right. Clearly this was a complete accident, but hey, sometimes humans just see things in other things, and this time the setup inside an Olympic stadium looked like some so-called private parts.

To explain for those of you who didn't immediately make this connection, the inside of the arena was set up so that there was a long, pink strip running down the middle of it with people on either side, and something that from a certain angle looks not unlike a clitoris, plus some more visual stuff that is just pretty labial once you notice it.

I know. I know. The opening ceremony is all about the Parade of Nations, and a celebration of the host country, and athletes getting their moment in the spotlight. But still, I'd be surprised if some of those athletes wouldn't also think this was pretty funny to look at — perhaps even empowering, in a country that is known for celebrating the female form. In a ceremony that was all about pushing boundaries, maybe this Freudian imagery was even intentional.

Here are the photos of the vagina arena... I mean, the wonderful Olympic stadium where dreams will come true. And I'm going to stop influencing your opinion here, because these really speak for themselves:

Here's what Twitter users had to say about the situation:

Not the most traditional part of the night, but it definitely made for a refreshingly ridiculous moment for all the Olympics fans out there.