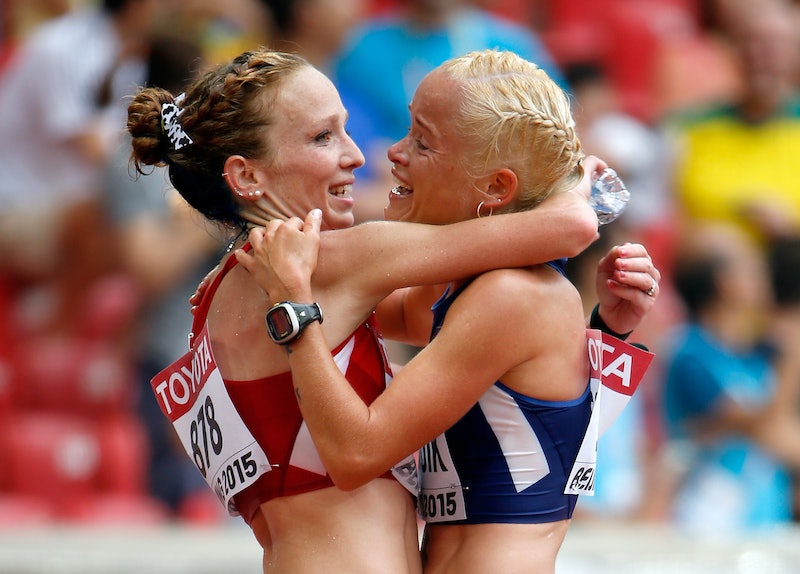 Three women from Estonia are set to make Olympic history with or without winning a medal. Known as the Trio to Rio, sisters Leila, Liina, and Lily Luik are thought to be the first set of triplets to ever compete in the Olympic Games. The International Olympic Committee believes this to be the case, although it has admitted it doesn't keep track of sibling competitors. Thankfully, there are others who do. The International Society of Olympic Historians reports 200 sets of twins have competed at the Olympics, according to the New York Times. But triplets? They're "99.9 percent sure" this is a first.

Hailing from Tartu, in southern Estonia, the 30-year-old Luik sisters will represent their small Baltic nation in the women's marathon on Aug. 14. Like a lot of triplets, Leila, Liina, and Lily were born premature. (The odds of being born a triplet, by the way, are somewhere around one in 8,000.) But their interest and training in long-distance running came — with a little push from Liina — much later in life. After years of working as professional dancers, the women transitioned into running about 6 years ago, at the age of 24.

"We saw ... after one year we had good results in Estonia and we thought we could achieve something good also outside of Estonia and to do some big competitions like European Championships and the Olympic games," Lily told Reuters. Following their push into competitive distance running, the triplets now train together each winter at camp in Kenya.

Training together may help them push through a dull workout, but when it comes to their race in Rio, the Luik sisters are not only racing against athletes from other nations, they're racing against each other. For the Luik triplets, the idea of crossing the finish line together has a certain romantic appeal, but it could potentially dull what competitive edge they do have (none of the women's qualifying times come close to touching the Olympic record of 2 hours 23 minutes and 7 seconds).

"As a sportsman in Rio, it is best to run your personal best," Liina, who leads her sisters with a personal best of 2 hours 37 minutes 11 seconds, told the Times. "If you think like a team or like sisters or with your heart, maybe the best way is to finish together. It's good if we are together. But if I feel my personal best coming, I'll go."