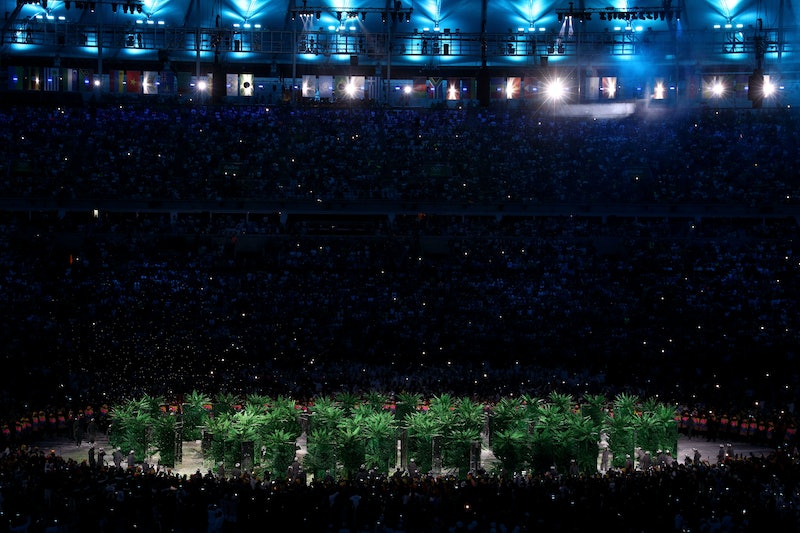 The Olympics opening ceremony in Rio de Janeiro has been many things: An introduction to Brazilian culture; a parade of many, many nations; and a collection of entertaining moments. Naturally, Twitter users have been on the case all Friday night long, not letting the smallest details go unnoticed. There was a moment when the tops of those silver, cheese grater-looking boxes exploded to reveal green plants that formed the Olympic rings. Now, I don't know about you, but to me and many viewers on Twitter, those green Olympic rings looked like weed.

Not only that, but the performance showed a big puff of green smoke emitting from the cheese-grater looking contraptions as they revealed the plans, adding even more visuals that brought marijuana to the mind of many people watching. Clearly, none of this was intentional. Still, sometimes viewers can't help but see a sillier version of things — it makes watching large events like this even more fun. According to The West Australian, the graters were supposed to be giant seed planters, but when those rings formed, let's just say they sort of looked like they held a certain kind of other seed that sprouts a very notable kind of leaf that you either smoke or ingest. Ahem.

And Twitter definitely noted this occurrence, so I wasn't alone in noticing the accidental imagery in this performance.

More like this
What Is Jeanie Buss' Net Worth? The Lakers President Is Uber Rich
By Hugh McIntyre
Twitter Is In Utter Meltdown After 'Derry Girls’ “Poignant” Finale
By Sam Ramsden
Jake Daniels Just Became The UK’s First Active Football Player To Come Out As Gay Since 1990
By Sam Ramsden
Rebekah Vardy & Coleen Rooney’s Trial Has Officially Begun
By Bustle UK
Get Even More From Bustle — Sign Up For The Newsletter