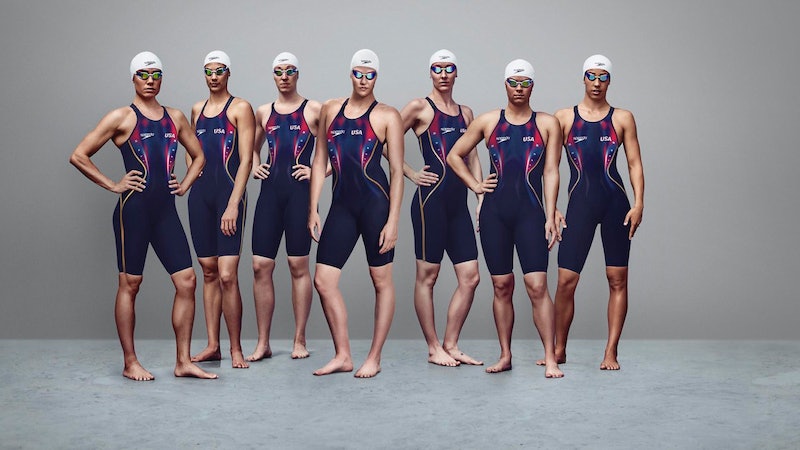 There's still more than a month left for Summer 2016. The 2016 Summer Olympics have just kicked off. Of course our eyes are fixed on the 2016 USA Olympic Swim Team and their swimsuits. Many Olympics viewers may even want to wear swimsuit styles similar to those sported by Missy Franklin, Natalie Coughlin, and Jessica Hardy and won't mind seeing other dudes copy Ryan Lochte's or Nathan Adrian's fitted trunks, either! So, who designed the 2016 USA Olympic Swim Team suits? It's a classic brand, actually.

Men's Fitness and NBC both reported that Speedo International created some of the swimwear donned by the athletes and competitors. These pool pieces are anything but basic, though. They are heavy duty and have a laser-sharp mission and that's to help the wearers look and feel their best during the heat of competition.

Franklin has worn Speedo apparel for most of her career and espoused the brand's craftsmanship in the initial press release, per Men's Fitness, saying, "I am honored to wear the stars and stripes on my Fastskin suit. Speedo has truly created suits that combine the needs of their athletes with the latest developments in technology, and the addition of this patriotic design makes me even more excited to work toward the opportunity to represent my country this summer."

Clearly, the Speedo designs are not just about the swimmers looking good —which they do— but about feeling their best, as well.

What styles did Speedo create? The brand crafted new designs of the Fastskin LZR Racer X and Fastskin LZR Racer 2 swimsuits, which the press release said were meant to call attention to muscle definition and so that swimmers will feel fast while in the water.

Oh, hey guys! I need to go jump in a pool to cool off after a look at this scorching photo.

Know what the best accessory is for these swimsuits? Oh, just a bunch of gold medals around their necks!