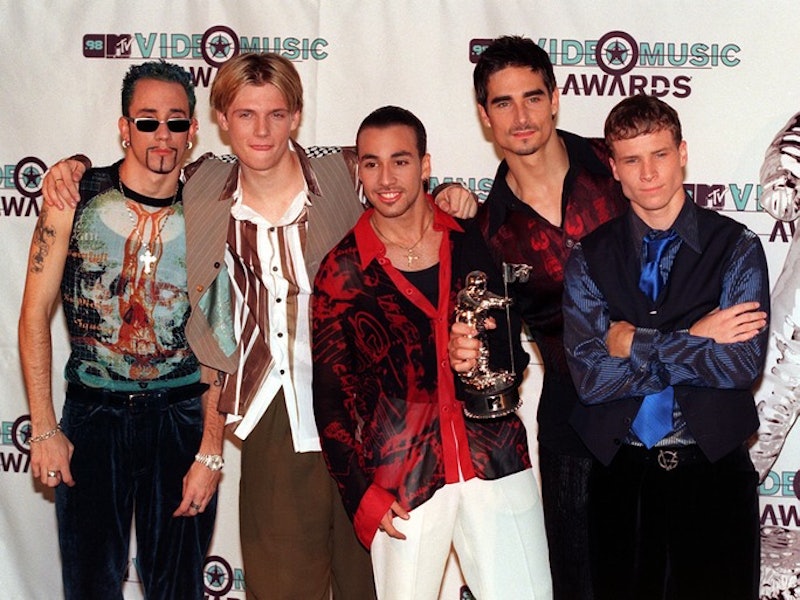 Let it be known: I don't care how cool you are, how much Philip Glass you stream, or how you're pretty into opera these days. Nope. Once upon a time, whether or not we admitted it, we were all the same when it came to our love of boy bands, and why the hell not? Boy bands are an exercise in shameless audience-indulgence. They gave us catchy melodies, enough different "types" of boy so that at least one per group was guaranteed to catch your eye and they offered the best dance moves you've seen since that one (/10) time(/s) you watched Bring It On. Even a lot of weight was put on what your favorite '90s boy band says about you, which, by the way, is a totally legit personality indicator. It said a lot!

I mean, the '90s were nothing if not a singularly rich era for boys singing pop music in perfect harmony and sometimes it felt as if there were as many boybands as stars in the galaxy. There were boybands for every type of person — and the boyband you flew a flag for said as much about you then as your favorite type of craft beer does now, you urban sophisticate, you. There were so many boybands and so many incredibly distinct aesthetics to choose from. It was incredible that we didn't get choice fatigue. But no. Your favorite boyband was inscribed into your heart as irreversibly as your star sign, whether you're a left-hander or right-hander, and if you were Team Jess or Team Dean. Let's explore.

Oh, so you nursed a secret sweet spot for these three little scamps? You alone, amongst all teens and pre-adolescents, didn't take yourself too seriously and you were even cliché-resistant enough not to spend your entire adolescence longing for bad boyz. Hanson exuded wholesome vibes and that was A-OK with you. You probably had all sorts of neat, wholesome hobbies just like I totally imagine the Hanson brothers did as boys: skateboarding, guitar-playing, and trampoline.

Looks were important for you (LBR, Nick Lachey was probably the most model-like of all 90s boyband lead singers), as were feelings. You, like lots of teenagers, had so, so many emotions all the time, and ballads were your jam. Your idea of high school heaven? Slow dancing (with zero irony) with a Lachey brother at a public event. Same.

"And no calling those 112 guys on the phone!" The music video that established the legend: the 112 guys were sweet and soulful, but they were also cool enough that you still were attracted to their bad boy qualities. Extra points for the fact that these guys were slick enough to make matching outfits look kind of hip.

Because, yes, they mostly released their hits during the '80s — but did you forget that one 1990 album, Step By Step? Shame on you. Go to your room and think about what you did — namely, missing out on a pretty epic '90s boy band album. These guys did it before everyone else did! If you flew a flag for NKOTB, you weren't concerned with being hip, you were into classic quality: sure, they're not subverting the form, but they don't have to. The New Kids damn invented it. You probably rock a lot of timeless classics: perfectly fitting white t-shirts, little black dresses, mid-blue jeans. While that might sound boring to others, you know the deal. In a frantic trend-obsessed world, being into classics can be refreshing and freeing.

Back in my misspent youth, when I was busy posturing over loving grunge, I secretly nursed a special place in my heart for *NSYNC. Too self-consciously cool to ever deliberately listen to them, I spent my teenage years in a pop closet denying the truth: when they came on the radio, I adored them. And why not? While they don't subvert the form any more than New Kids On The Block did, they very clearly had a complete ball being in a boy band and took a playful enjoyment in being teen-idols. These guys are an injection of pure fun to the eardrums. If you openly enjoyed *NSYNC, then you were like the band themselves: totally secure, totally not self-conscious, and you owned what you were into.

This boy band were for pretentious teens like yours truly: boy band haters who secretly loved boy bands. They marketed themselves as some sort of Rap/R&B group, but c'mon: they sung about girls, they offered up catchy pop melodies, and, well, they were a band composed entirely of boys. Also, their name stood for Lyte Funky Ones, and I'm never getting over that.

The name says it all. If you were into this band, you were evolved enough as a teen to be into men, not sulky adolescent boys. These guys knew how to treat a lady: with a ca pella harmonies and sharp tailoring. And if as a teen you weren't intimidated by that, snaps to you. I don't want to make totally unnecessary, vast generalizations, but I'd assume anyone who was into Boys II Men over all other '90s boy bands found happiness in stable couplings with men who own impeccable suit collections.

You pretend to be grounded. You're from some totally normal town, you hate drama. But really, you love drama, high theatrics, just like this unabashedly camp British boy band. Just look at the stage props: these guys secretly wanted to be doing musicals.

In the '90s, Brits were the new black and it's easy to see why with pop gems like this. 5ive were the opposite of Take That: they were down to earth lads who were presumably the chillest boyband on the circuit. Those shouty choruses? Spiky hair/sportswear combos? Don't tell me these boys were divas because I won't believe you. If you were into 5ive, congrats, you were a genuinely chill teen.

Arguably the gold standard of boyband-ery, the Backstreet Boys weren't pulling the wool over anyone's eyes. They were five cute boys churning out pop hit after pop hit. They weren't trying to be sophisticated, or a rap group, or an R&B group. They were and are the dictionary definition for "boy band." Anyways, if you were into them, you were presumably much like the members of the group themselves: outgoing, sociable and relaxed about your mainstream interests. So what? Not everyone had to spend their teen years teeth-gritting through The Birthday Party's seminal albums.

Phew. It's been a wild musical journey and we've had to face up to some hard truths about who we are and who we once were thanks to our taste in boy bands. But the important thing is that we all admit our love once and for all. We're boy band fans and we don't care what anyone thinks about that.