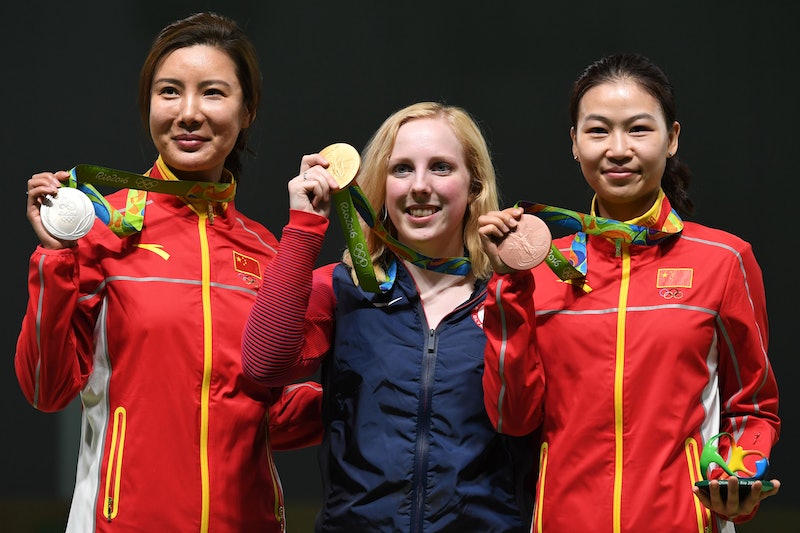 The curtain has risen on day one of the summer Olympic Games and things already are off with a bang. Literally! Although we're just a few hours into the Games, the first gold medal of the Rio 2016 Olympics has already been snapped up. American Virginia "Ginny" Thrasher won Rio's first gold medal Saturday with a surprise victory in the women's 10-meter air rifle event.

Although she ranked 23 in the world heading into the Games, Thrasher narrowly defeated Li Du, ranked number 6 in the world, and Siling Yi, ranked number three, with an overall score of 208 — an Olympic record. Li and Yi took home the silver and bronze medals for China. Sarah Scherer, Thrasher's Team USA teammate, came in eighth.

Born in Springfield, Virginia, 19-year-old Thrasher balances her Olympic aspirations with studies at West Virginia University, where the sophomore biomedical engineering student also competes on the collegiate rifle team. Unsurprisingly, Thrasher is a National Collegiate Athletic Association (NCAA) champion. She took home gold, silver, and bronze medals from the National Shooting Championships in 2015 after placing in the 50-meter three position, 10-meter air rifle, and 50-meter prone events. In Rio, she will also compete in the 50-meter three position, slated to be held next week.

Despite her NCAA titles, Thrasher wasn't thought of as the one to beat going into Saturday's event. All eyes were instead on 34-year-old Du, a two-time Olympic gold medalist. It was a fact even the teenager acknowledged in an interview with West Virginia University in early July. "Given my age and the few years I have been shooting, I think others are stunned (I made the Olympic team)," Thrasher said. But perhaps it was her underdog status that made her upset in the women's 10-meter air rifle event even sweeter.

Thrasher credits her love of shooting to hunting sessions with her grandfather, telling USA Shooting News "shooting is a family thing for us." The 19-year-old shot her first gun (after reportedly taking a hunting safety course) just five years ago while hunting whitetail deer.

Stories like Thrasher's upset in the women's 10-meter air rifle event are what the Olympic are all about. For all the media's talk of world champions and predicted medalists, there are many athletes, like Thrasher, who come to the Games relatively unknown, virtual underdogs whose confidence and passion for their sport carry them all the way to the medal podium in unexpected victories. What better way for Team USA to bring home Rio's first gold medal.